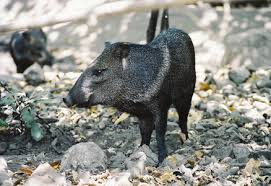 Facts about Javelina, "Scientific name for Javelina is Dicotyles tajacu". The "Javelina" is a type of peccary, resembling a wild pig. The javelina is a member of the Tayassuidae family, the same family to which pigs belong. It is also called the peccary, skunk pig, Spanish javali, or sajino. The collared peccary has the species name Tayassu tajacu. This javelina species can live in rainforests and scrubland equally well. The white lipped peccary has the scientific name Tayassu pecari. This species lives in Central and South American rainforests. The Chacoan peccary carries the scientific name Catagonus wagneri. It lives in Paraguay. A fourth species, the giant peccary, is suspected to exist in the Amazon but not yet confirmed by science. Its scientific name is Pecari maximum, literally the large pecari. Peccary species were native to North America and moved south during the Great American Interchange, when the Isthmus of Panama formed.
Javelina are native to Central America. They are even raised in Central and South America as a source of meat as Eurasian hogs are in the United States. The collared peccary has migrated into Arizona as Arizona’s native grasslands were replaced with cactus and scrubland. You can now find javelina munching on garden plants in suburban Tucson.

Javelina grow to be three to four feet long. They can reach ninety pounds in weight. Javelina have a snout like pigs, but they have stomachs more complex than those of pigs. They walk on their middle two toes like pigs, but the other toes may be missing altogether, depending on the javelina species. Javelina have short, straight tusks. Pigs possess long curved tusks.

Javelina, like pigs, are omnivores. Javelina prefer grasses, seeds, fruit and roots. Their tusks are ideal for crushing hard seeds and cutting up roots. They will eat grubs. Javelina don’t limit themselves to wild foods. They will readily consume birdseed, plants from the garbage and garden plants. They are attracted to tulips and daffodils for the bulbs.

Javelina will rub their tusks together to make noises to warn away predators. Javelina live in herds of up to a hundred individuals, and each herd has a territory. Javelnia mark their territory with scent glands whose odor is so strong even humans can sense it, hence the nickname the skunk pig.
Javelina are primarily active during the daytime but can become nocturnal during the hottest part of the summer.

Javelina possess a dense dark coat of fur in winter that they shed for a short hair layer in summer. Piglets have a red fur they lose after three months of age.

Because Javelina are native to South America’s tropics, they breed year round. They can have two litters in a given year. Most young are born in the summer, when rainfall in the southern United States is greatest. The young are weaned in six weeks. Javelina are mature at ten months of age and can begin breeding at that time. Javelina in captivity live up to 20 years, but those in the wild live seven to eight years. They are not only hunted by humans but prey for predators like mountain lions and bobcats. Coyotes and eagles prey on the javelina piglets. Hunting of javelina requires a hunting permit in most jurisdictions.
Javelina are considered pests in many areas. Their habit of digging up roots tears up gardens and turns plots with young trees into muddy morasses.

Search the Web for More information on Javelina at LookSeek.com Search