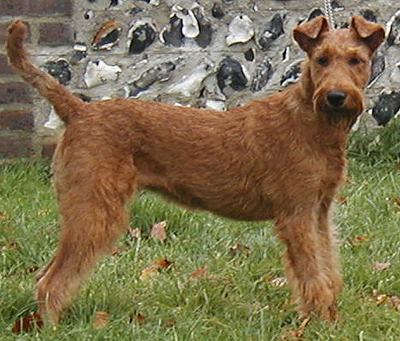 The Irish Terrier Dog is energetic, brave and faithful, often warmly called as daredevils. These breeds love their families, and they are amusing companions. The Irish Terrier Dog breed is a good buddy for active kids, affectionate on a good play. They are daring, curious and prepared for action and adventure. They will be clever if they are trained appropriately, and they can be trained easily. Irish Terrier Dog boast a strong defensive nature and so they need overriding owners. If this dog breed detects an owner has a humble side to them, it will turn out to be domineering because the dog will consider it has to be in charge.

The average lifespan of the Irish Terrier Dog ranges from 12 years to 15 years.
If purchasing a Irish Terrier Dog from a breeder, make sure to find a good breeder with references check at least two to three of the puppies that were purchased from this breeder.

A Irish Terrier Dog’s mouth can apply approximately 150 to 200 pounds of pressure per square inch and an American Pit Bull Terrier, German Shepherd Dog and a rottweiler can have 320 LBS of pressure on avg.

Search the Web for More information on Irish Terrier Dog at LookSeek.com Search