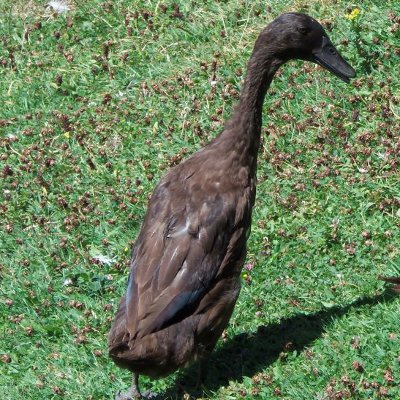 The Indian Runner Duck like swimming in streams and ponds, but mostly preoccupied when running around in grassy meadows when looking for slugs, catching flies or eating worms. Most of the Indian Runner Duck do appreciate open spaces so they can relax during sunny days. The Indian Runner Duck do not fly and make less noise when compared to other breeds of call ducks. Only the female Indian ducks quack. This makes them one of the best ducks to keep as a pet because they are not very noisy.

The male Indian Runner Duck will guard their nest by chasing away other ducks. Once the female Indian Runner Duck lays 5 to 10 eggs, she will start to sit on her eggs to keep them warm so that they can hatch into baby ducklings. The eggs will hatch on average within 26 to 28 days. Baby Indian Runner ducklings are able to fly within 5 to 8 weeks. Indian Runner Ducks will lay more eggs, when there is more daylight, that's why farmers will keep the lights on in the ducks house for longer periods of time.

Ducks are related to geese and swans and the duck is the smallest of these birds with shorter wings and neck and a stocky body. Indian Runner Duck s on average, live 4 to 8 years and can live up to 12 years, depending on the breed. Indian Runner Duck s are omnivores; meaning - an animal that eats food of both animal and plant and origin.

"Scientific name for Indian Runner Duck Anas Platyrhynchos" meaning - Wild dabbling duck from which domestic ducks are descended; widely distributed. From New Latin "anas" meaning (Duck) and the word Platyrhynchos comes from "platyrrhine", Ancient Greek meaning (broad snouted, flat-bridged nose).
Ducks are birds in the Class of "Aves". Ducks of all types are part of the bird family "Anatidae". Ducks are also called "waterfowls" they are generally found in places were there is water, such as ponds, rivers, streams, lakes and occasionally your back yard pool.

Feature of the Bill of the Indian Runner Duck

A "bill" is what is call a Indian Runner Ducks mouth. There are no teeth in the Indian Runner Ducks bill, they have rows of thin bristles, which helps them to filter pieces of nutrition out of the water. Indian Runner Ducks swallow there food whole and it goes to an organ called a gizzard, were the food is first ground up and than moves on to the stomach. The different bill shapes and sizes for finding food, has over time mutated to fit each environment. The bill is flat and broad and has rows of fine incision along the outer edge called "lamellae". meaning a thin membrane, plate, scale or layer, as of cell wall or bone tissue. The larnellae helps the Indian Runner Duck to clutch food for feeding.

Search the Web for More information on Indian Runner Duck at LookSeek.com Search