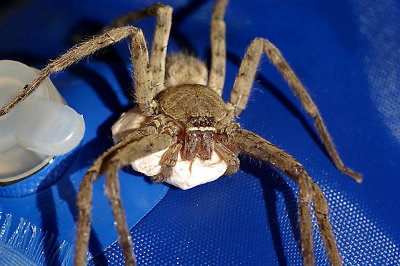 Facts about Huntsman Spiders, "Scientific name for Huntsman Spider is Heteropoda venatoria". The Huntsman spiders are large and long legged spiders that are mostly grey to brown and sometimes have banded legs. The majority of huntsman spiders such as delena which is the fattest, as well as Isopedella, Holconia and Isopeda have rather flatted bodies which are adapted for living in narrow spaces under rock crevices and loose bark. The Huntsman Spider legs assist them to live in such places in the sense that they have their joints twisted for them to spread out forward and literally in a crab like fashion instead of bending vertically in relation to the body. It is worth noting that both badge and brown huntsman spiders have less flattened bodies compared to others.

A Huntsman Spiders stomach can only take liquids, so a spider needs to liquefy their food before they eat. They bite on their prey and empty its stomach liquids into the pray which turns it into a soup for them to drink.

A male Huntsman Spider has two appendages called "pedipalps" a sensory organ, instead of a penis, which is filled with sperm and insert by the male into the female spider’s reproductive opening.

Adult huntsman spiders do not build webs. However, they hunt and forage for food, and their diet primarily consists of insects and many other invertebrate. Even though they live in the crevices of the tree bark, the Huntsman Spider will frequently wander into vehicles and homes. Huntsman spider also tend to exhibit a cling reflex in case they are picked up, thus making them very difficult to shake off and more likely to bite someone. Generally, the female huntsman spiders are fierce defenders of their young and egg sacs.

Huntsman Spiders have oversize brains.
In the Huntsman Spider the oxygen is bound to "hemocyanin" a copper-based protein that turns their blood blue, a molecule that contains copper rather than iron. Iron-based hemoglobin in red blood cells turns the blood red

Huntsman Spiders have two body parts, the front part of the body is called the Cephalothorax-(the thorax and fused head of spiders). Also on this part of the body is the Huntsman Spider’s gland that makes the poison and the stomach, fangs, mouth, legs, eyes and brain. Spiders also have these tiny little leg-type things called (pedipalps) that are next to the fangs. They are used to hold food while the spider bites it. The next part of the Huntsman Spiders body is the abdomen and the abdomens back end is where there is the spinnerets and where the silk producing glands are located.

Huntsman Spiders do not have a skeletons. They have a hard outer shell called an exoskeleton-(a rigid external covering for the body in some invertebrate animals). The exoskeleton is hard, so it can’t grow with the spider. The young Huntsman Spiders need to shed their exoskeleton. The spider has to climb out of the old shell through the cephalothorax. Once out, they must spread themselves out before the new exoskeleton will harden. Know they have some room to grow. They stop growing once they fill this shell. Female spiders are usually bigger than males.
Female Huntsman Spiders lay eggs on a bed of silk, which she creates right after mating. Once the female Huntsman Spider lays her eggs, she will than cover them with more silk.

Search the Web for More information on Huntsman Spiders at LookSeek.com Search