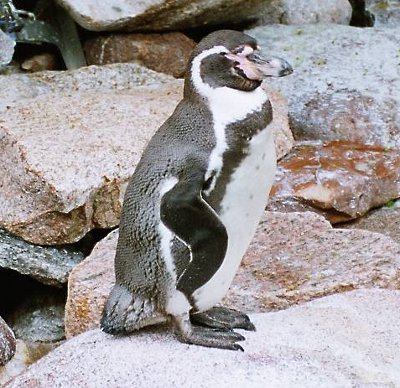 Features of the Humboldt Penguin

Humboldt Penguins feathers come in two layers, first layer is the under layer for insulation and the top waterproof layer that is flat and prevents water from reaching their body. Humboldt Penguins regularly preen (meaning of a bird, cleans and straighten its feathers with its beak) their feathers to keep them in good condition. They molt (Molting -(of an animal-shed old hair skin, or an old shell, to make way for a new growth that will occur, the adult birds were already molting into their winter shades of gray) between July and September and this takes about 10 days.

Predators of the Humboldt Penguin

Predators of the Humboldt Penguins include sharks, whales, leopard seal, sea lions and on the land animals like dogs, foxes, snakes and cats and also steel their eggs.

Diet of the Humboldt Penguin

Humboldt Penguin diet consist of small fish anchoveta, sardines, herring and smelt that consume the cold waters off the South American coast. Humans also fish for anchoveta, which they use to make bone meal for animal feed. They also eat squid and crustaceans like krill and shrimp.
Penguin don't drink water, since they take in seawater as they swallow their meal and like all penguins, they have a that special gland that removes salt from their bodies after swallowing saltwater.

The Humboldt Penguin reach sexual maturity from 2 1/2 to 3 years of age. The nests are made in cracks, caves and holes. Sometimes they make the nests in open places especially in rocky shores. Female Humboldt Penguin lay one or two eggs, but there is a small egg usually doesn't survive.
The incubation takes 38 to 45 days and both parents take part in this process. The Humboldt Penguin parents make the situation worse because if there is food scarcity they only feed the big one.
The sitting job is made by both parents who alternate. When one Humboldt Penguin is taking care of the chick the other one is hunting for food. When the chick reaches 30 days old, the parents now can both go hunting while returning to feed the chick. Humboldt Penguins will venture out on there own, when they are about 75 to 90 days.

Humboldt Penguins surroundings are warm and that’s why you will never see them huddled together to warm themselves. Just like other penguins they are monogamous.
Humboldt Penguins are very social. They live in large colonies and communicate a lot. The advantage they get in living in large colonies is that of being able to defend themselves in case of attacks from the enemies.

Population of the Humboldt Penguin

The Humboldt Penguins that have mated recognize each other by the vocal and visual mechanisms that they have within the colony. The population of these birds ranges from 4,500 to 12,500. They have been declared to be an endangered species in the U.S in 2010.

Average life of the Humboldt Penguin is 15 to 20 Yrs in the Wild
and up to 30 Yrs in Captivity.

Search the Web for More information on Humboldt Penguins at LookSeek.com Search