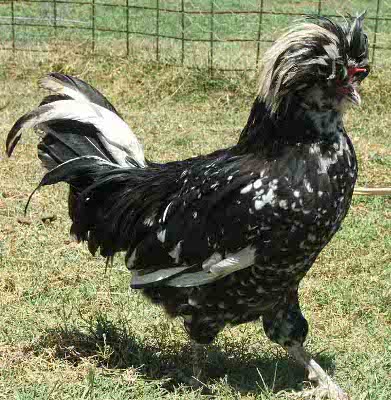 Facts about Houdan chickens. The Houdan is one of the oldest chicken breed that is known to have originated from the Houdan village in France. The Houdan chicken’s originality is not that clear as its existence predates the modern agricultural writing. It is not quite clear which breeds did play a role in there development. The breed was more prevalent in France than it was in England. The Houdan chicken has a number of unique features that generates the speculation about the breeds that were used.

The Houdan chicken generally has rectangular body shape with relatively short legs. Its head consists of muffs, beards, and a crest. The Houdan chicken are also a special breed because they have five toes instead of the common four–toed chicken breed. Their V-shaped combs and wattles are somehow small and will often get hidden by the abundant feathers on its head and face.

Generally the Houdan chicken is often referred to as the molted Houdan, this is because they molt white and black feathers covering their whole body.

The Houdan chicken are a heavy table fowl, they are quite calm in nature, they are placid and the hens are fairly good layers. They have a good conversion ratio; that is food consumed per laid eggs. The Houdan chicken lay quit huge eggs and they tend towards broodiness though they are not good sitters, they are thought to be quite heavy and tend to break the eggs. In effect to this it is advised that one should not let the eggs pile up on top of another to avoid the breakage loss.

Apparently, the Houdan chicken is quite different in appearance, and thus they need special drinkers as its large and unique crest and beard will often get wet and seriously dirty if they drink from the conventional drinkers, often a little water in a bowl is recommended

Search the Web for More information on Houdan Chicken at LookSeek.com Search