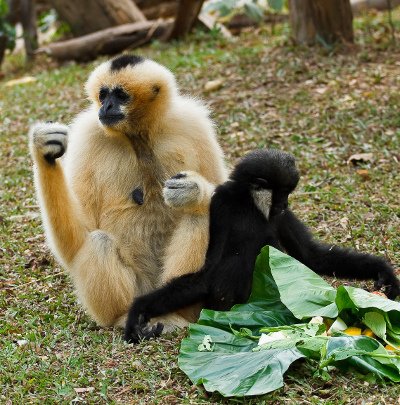 The Hoolock Gibbon Apes are arboreal and diurnal. They have long arms that they use for brachiating from one tree to another. Their main source of food is fruits which they sometimes collect as a group or individually. The Hoolock Gibbon Ape also feed on various insects such as spiders and butterflies. They also occasionally feed on leaves which are their main source of proteins. The Hoolock Gibbon Ape do walk upright on their two legs while on the ground although this rarely happens. If they are not able to leap from one tree to another they opt to walk. Just like other gibbons, they also do not possess a tail.

Hoolock Gibbon Apes, just like other gibbons, are social in nature and join other pairs to make a group. They lead a monogamous life, and are protective of their families. The pair will rise early in the morning to sing a duet to mark their territory. The male Hoolock Gibbon Ape takes the lead, and the female joins in to affirm her support for her partner. They communicate through the use of loud calls. Each pair has its unique way of performing a duet.

The gestation period of the Hoolock Gibbon Apes is seven months. A female is only able to produce one offspring in a year. The young ones have buff colored hair and milky white teeth. The fur color changes for the male to black after six months but the females retain their color. The young Hoolock Gibbon Ape is weaned off at the age of two years. The offspring’s take eight years to reach sexual maturity. At this stage, they leave their family in search of a mate to start a family. Researchers have put the life span of the Hoolock Gibbon Apes at 25yrs in the wild and 30 years if in captivity.

Search the Web for More information on Hoolock Gibbon Ape at LookSeek.com Search