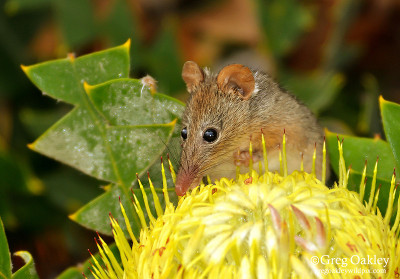 Facts about Honey Possum. "Scientific name for Honey Possum is Tarsipes rostratus". The honey Possum is a little marsupial found in the south-west part of the Western Australia. The region is known to be one of the oldest places of the earth that contains the rich variety of nectar-producing plants.

The idea of living in an environment with plenty of pollen and sweet nectar resulted to the Honey Possum losing their teeth, looking like tiny pegs. The tongue again with age has adapted well to improve in the licking of pollen, with a brush-like tip similar to those of the nectar sucking birds. The Honey possum’s ancestor fed on insects and indeed, now they can not chew the hard outer skeleton of the insects. This shows the mutation adaptability to suit its survival on nectar. Honey Possum is know to be the only non-flying mammal in the whole universe that can survive on pollen and nectar.

Physically the Honey Possum are quite small with long tongues. They have a long tapering head that is covered in short hair. The Honey Possum have an overall grayish color except for the three black stripes running down the middle of their back. The male Honey Possum can weigh up to 7 to 8 grams, though the female weigh slightly more reaching a weight of up to 16 grams. And they average a length of about 8 cm excluding the tail.

The Honey Possum have long tails, quite long than their body, the tails aide in climbing along branches and between the flowers.

The honey possum is not known to have a high rate of reproduction, in fact compared to the other small mammals its rate is quite lower though still enough to sustain its survival. And until now it is not known if it’s the good motherly nature of the Honey Possums that all their young ones survive or the nutritious value of the pollen which they consume in large quantities that aide in their survival.

The gestation period is about 3 weeks and the young ones will stay in the pouch for about 9 weeks. A Honey Possum mother can rise about 4 – 6 young ones in a year.

Search the Web for More information on Honey Possum at LookSeek.com Search