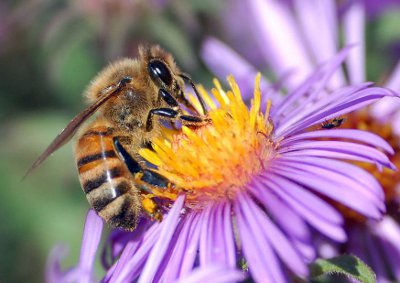 Facts about Honey Bees, "Scientific name for Honey Bee is Apis". Honey Bees are primarily distinguished by their production and storage of honey, and they also construct perennial colonial nests from wax. Currently there are seven recognized species of the honey bees and with a total of 44 subspecies. The honey bees represent a very small fraction of the 20,000 bee species. Though there are other related bees that also produce and store honey, only the members of Apis are accepted as true honey bees.

The honey bees are believed to have originated in South East of Asia. Most of these species have been exploited majorly for honey and beeswax, and they have been moved extensively away of their native range.

The drones of the honey bees are produced from eggs that aren’t fertilized, meaning they will represent only the DNA of the mother queen. In fact the queens and workers do result from the fertilized eggs and means that they have DNA of both the mother and father.

Just as like a few other eusocial bees, colony is comprised of a queen which is a fertile female, a few thousand fertile males known as the drone bees, and finally a variable population of sterile worker bees.

The queen Honey Bees will lay its eggs singly in a cell made in a wax honeycomb that is generally produced and shaped by worker bees. A unique feature is that the queen is choosy on which eggs to fertilize and which to not. The larvae feeds on royal jelly that is produced by the worker Honey Bees, and later on they switch on to honey and pollen. An exception is a larvae fed on royal jelly only develops to be a queen bee. The larva will undergo a number of molting before it spins a cocoon in the cell and pupating.

Honey bees prefer warm climatic conditions, during the cold climate it stops flying specifically when temperature drops below 10 degrees Celsius. The Honey Bees will crowd to the center of their hive to eventually form a winter cluster. The queen bee is located at the center of the cluster, and the surrounding worker Honey Bees shiver to maintain the temperature at the center at around 27 degrees Celsius. The worker Honey Beess will keep rotating through the cluster moving inside and outside the cluster, this is a method to ensure that no single individual gets cold during the winter, and large volume of honey will be consumed during this period.

Honey bee worker sting intruders as a defense mechanism, the worker bee posse small barbs on their sting. The stings of the Honey Bees are modified so as to detach from the body once it is lodged. The sting contains its own ganglion and musculature that enables the sting continuously delivering venom even when detached. The worker Honey Bees will eventually die after stinging, and it is basically the only species that will die after stinging. Honey bees are believed to communicate through various different odors and chemicals.

There are three types of bees in the Honey Bees hive, a Drone, Worker and the Queen. A worker bee will die if she uses her stinger.
The hind legs of the Honey Bees carry pollen in them and it is called a pollen baskets. Pollen is the protein for which the baby bee needs to grow.
A Honey Bees has two stomachs, the first stomach is for eating and the other stomach is specially designed for storing nectar collected from flowers and water, for making it possible to carry it back to the hive.

Search the Web for More information on Honey Bee at LookSeek.com Search