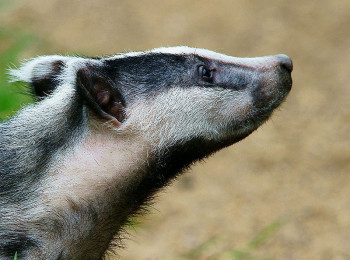 The Honey Badger has black fur on the stomach, face, and legs but white on its back. They look a little like a skunk with a much wider stripe, but skunks try to avoid humans unless rabid, whereas a honey badger is prone to attack the human. There are a dozen subspecies of Honey Badgers, each distinguished by how white or grey the back stripe is and its size. The black ratel in Ghana is entirely black, whereas others have narrow white stripes on the spine or grey across the entire back.
Honey Badgers have been known to attack buffalo, wildebeest, and boars for food. They’ll attack snakes, whether to steal its prey or eat the snake. It depends on its mood. The Honey Badger will eat young foxes, jackals, wild cats, and antelope if they can catch it. Honey Badgers will attack lions, jackals, and other predators to drive them off. Honey Badgers will eat spiders, scorpions, bird eggs, and bee larvae. This is how it got its English name – observers thought it wanted the honey, not realizing it was after the larva. The Honey Badger simply shoves its head into the hive and eats. Those living in the desert will eat melons to get water, but they get most of their water from their diets.
The Honey Badger can release a foul smelling liquid from its glands, but the odor doesn’t last as long as a skunk’s.

The Honey Badger has no predators. This is unusual given that other animals their size are eaten by lions, cheetahs, snakes, and so forth. Honey Badgers are partially immune to snake venom.
The Honey Badger ranges from Africa to Southeast Asia to India. Its wide range and virtual immunity to predation means it is not of concern by the IUCN.
They are wide ranging animals, documented to cover as much as 20 miles in a single day. They can climb trees and dig in the dirt.

In South Africa, they will say that someone is as tough as a Honey Badger which means they don’t put up with anything and they are fearless. This is why the South African Army’s infantry fighting vehicle is named the Honey Badger.
The Honey Badger has been seen attacking predators by attacking their genitals.

Search the Web for More information on Honey Badger at LookSeek.com Search