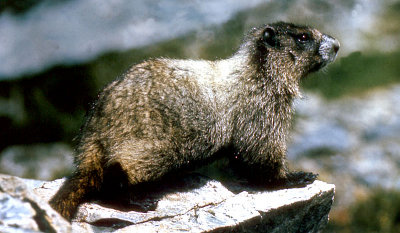 The species that are closest to the Hoary Marmot are the yellow-bellied, Vancouver Island marmots and the Olympic.

The Hoary Marmot is a bulky and large ground squirrel that has heavy but short limbs and a wide head. The adult Hoary Marmot measure between 24 to 32 inches (62 and 82cm) in length and this includes their tail which measures up to around 10 inches (25cm). there is distinct sexual dimorphism with the male Hoary Marmot squirrel being larger in body size compared to their female counterparts. Their survival is mainly dependent on their fat reserves especially when they go into winter hibernation.

The weight of the Hoary Marmot is dependent on the time of the year. In May, they average around 8 pounds (3.75kg) while in September, they weigh around 15 pounds (7kg). There are some exceptions where the Hoary Marmot weighs about 22 pounds (10kg) with others still attaining a higher weight of about 30pounds (13.5kg).

The Hoary Marmot have silver gray fur on their upper back and shoulders. The remaining part of the body has reddish brown fur with a head that is black in color on the upper surface and a white patch on the muzzle. On the chin area, there is fur and the same around the lips. The feet of the Hoary Marmot and its lower legs are all black.

The Hoary Marmot squirrel can be seen in mountainous regions with an attitude of about 8,000 feet (2,500 meters) above sea level. The Hoary Marmot can be found in western Canada and much of the area around Alaska. The Hoary Marmot prefer living above the tree line in alpine meadows and rocky terrains. Their habitats are dominated by herbs, grasses, sedges and Krummholz forest patches.

Hoary Marmots are herbivorous and as such they feed on leaves, grasses, flowers and sedges. While in the forest, these animals face the threat of predators such as black bears, golden eagles, wolves, red foxes and grizzly. Hoary Marmot squirrels live in colonies that can add up to 36 members. Each of the colonies has single dominant male and about 3 adult females. The adults usually takes care of the younger marmots.

The Hoary Marmot starts breeding straight away the moment it comes out of hibernation which is around the month of May. After mating, the females are responsible for raising the litters. The gestation period of the Hoary Marmots lasts between 25 and 30 days. At about 3 to 4 weeks, the young ones of the marmots start coming out of their dens. By this time, they have already grown a full fur and are ready for weaning. The sexual maturity for the Hoary Marmot is after two years.

Search the Web for More information on Hoary Marmot at LookSeek.com Search