History of the Tuba 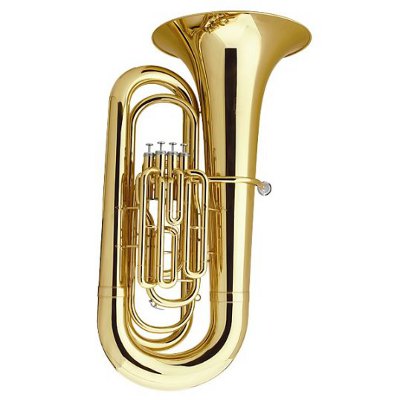 Tubas are traced to an instrument called the serpent created by Frenchman Edme Guillaume around 1600. This first version was made of a mixture of wood and metal, and the mouthpiece was made of anything from ivory to bone to metal. The original design as coiled back and forth and had six holes, played similar to a flute. Keys were added later to make it easier to play. The tuba is considered part of the valved bugle family, not a saxhorn despite the conical flare at the end that resembles the horns.
Over time, tubas gained keys, a body that wound around itself for easier conveyance, valves and eventually the modern four valve BB flat design that is standard for orchestras and marching bands today. Tubas are the lowest pitched brass instruments played today, thanks to the valves that allowed players to play the low end of the harmonic series.
What we would consider a proper tuba was patented by German Johann Gottfriend Moritz in the year 1835. That design had five valves that were the originators of the modern piston valves used on tubas today. The valves meant that players could play the entire scale in the lower range instead of the few notes that the holes on the instrument allowed them to play.
The largest version of the tuba is called the Anaconda, a contrabass design that appeared around 1840. The first widespread use of the instrument was in the 12th century in religious music. It was picked up by English military bands over the intervening centuries until adopted by civilian bands. Tuba players are part of many marching bands, jaz bands and bugle corps.
The B tuba has a tube about 18 feet long. The C tuba has a 16 foot long tube. The E tuba is 13 feet long. All have a conical bore. Longer tubes create a deeper sound.
A related instrument is called the ophicliede uses a bowl shaped mouthpiece but has keys and holes closer to that of the saxophone.
Tuba players are sometimes called tuba players, tubaist, brass players, bassists or tubists.

Search the Web for More information on History of the Tuba at LookSeek.com Search