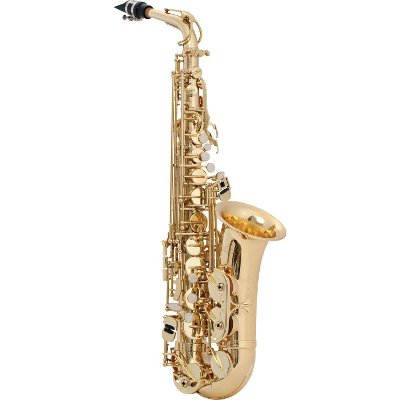 History and facts about Saxophone Music Instrument. The history of the saxophone can be traced back over 150 years. Although this seems like a long time, the saxophone is one of the newer instruments in the musical spectrum. It was invented by and named for Antoine-Joseph (Adolphe) Sax. He was an expert instrument maker and talented musician. The saxophone was patented on March 20, 1846. It has since become a necessity in every band due to its tonal beauty and versatility.


Sax grew up in the trade of instrument making. Sax's father was an expert in instrument making. By the age of six, Sax had already become an expert in it as well. Sax, being the musician he was, became aware of the tonal disparity between strings and winds: moreover, that between brasses and woodwinds. The strings were being overpowered by the winds and the woodwinds were being overblown by the brasses. Sax needed an instrument that would balance the three sections. His answer to the problem was a horn with the body of a brass instrument and the mouthpiece of a woodwind instrument. When he combined these two elements, the saxophone was born.


The first saxophone, a C bass, was displayed for the first time, in 1841, to the famous composer, Hector Berlioz. He was amazed at its versatility, unique tone, and control of dynamics. In 1842, Sax moved to Paris to introduce his new instrument to the rest of the world. Soon to follow was the creation of an entire saxophone family: fourteen different saxophones in all. Each differed by size and pitch. They were the: E flat sopranino, F sopranino, B flat soprano, C soprano, E flat alto, F alto, B flat tenor, C tenor, E flat baritone, B flat bass, C bass, E flat contrabass, and F contrabass. Many of these variations, however, are seldom used or have become obsolete.


The saxophone finally became known as an integral part of all bands in 1845. This is the year of the famous "battle of the bands". The French Army band was still using "traditional" instrumentation. Sax saw this as an opportunity to show the world how the saxophone could improve the tonal quality in all bands. He suggested a contest between an army band composed of the original orchestral instrumentation against a band with an instrumentation that included saxophones. Sax's band of twenty-eight men, compared to the French Army band of thirty-five, overwhelmed the crowd. That day, the saxophone was officially introduced into the French Army Band and soon to all other bands.


Many composers began to write music for the saxophone, but it was not until about seventy-five years later that the saxophone began to be used to play dance music. However, to do this the saxophone needed to be altered. Originally, the sax was designed to have a smooth, mellow, and balanced tone. This had to be changed so it could compete with the blaring trumpets, noisy drums, shuffling feet, and loud talking that accompanied the surroundings of early twentieth century dance bands. The mouthpiece of the sax was made smaller and more parallel. This gave the sax the loud, obnoxious sound needed for jazz and dance music. Since this metamorphosis, the saxophone has been thought of as primarily a jazz instrument.
Fear or hatred of music (Melophobia).

Search the Web for More information on Saxophone Music Instrument at LookSeek.com Search