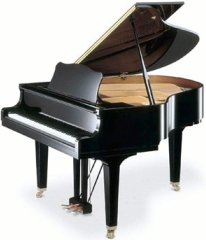 History and Facts about "Piano Musical Instrument". The piano is a relatively new instrument, its precursor invented in 1709, if you do not count hammered dulcimers in the Middle Ages. It was invented by a harpsichord maker, Bartolomeo Cristofori. His oldest surviving instrument from 1720 still exists and resides at the Metropolitan Museum of Art in New York. Critofori’s work probably spans decades, since the Medici family that commissioned him shows similar instruments in their inventory around 1700.
He wanted to create an instrument capable of more than one volume level, which was true of the harpsichord. You could not make it play softer notes or louder ones. His initial version of the piano was called the gravicembalo col piano e forte, a name shortened to fortepiano or piano forte before becoming simply piano. The original name means soft and strong musical instrument. This is because the instrument’s volume depends on the strength in which the piano player presses the keys.
The piano Cristofori invented wasn’t well known outside of the Medici family until Maffei, an Italian writer, wrote an article about it and included diagrams. Gottfried Silberman copied Cristofori’s design but added pedals that lifted the dampers for all of the strings. Silberman’s improved design was promoted by famous composer Johann Bach by 1747.
The Cristofori piano has changed relatively little in the past three centuries, excepting electronic keyboards that mimic his keys but rely on sound generated by electronics. The piano has primarily altered the internal mechanics to make them easier to tune and maintain their pitch with less tuning. For example, the hammers that hit the strings are covered with felt or another material. A repetition lever was added in 1821 so that the same note could be played again before the key had not yet reached its height. The tonal range has expanded to seven octaves from the five that existed in Mozart’s time. Another change was the piano’s case. The grand piano that came out in 1777 has a grand case, using the harpsichord case. Spinet upright pianos were first built in the 1930s. Companies like Steinway had their designs popularized not for new features but design modifications like standardized metal bands and piano wire that made pianos much cheaper.

Search the Web for More information on Piano Musical Instrument at LookSeek.com Search