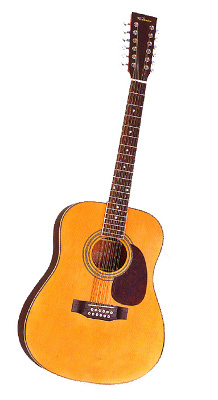 History and Facts about "Guitar Musical Instrument". The earliest ancestor of the guitar is probably the lute. The lute is a stringed instrument with strings parallel to the sound table and along the neck of the instrument. The word lute derives from the Arabic word for wood or the Persian word for stringed instrument. Lutes may be short necked or long necked, whereas guitars all have long necks.
The word guitar in English traces back to the Spanish term guitarra, which derives from the Latin cithara and Greek kithara. However, the modern instrument has little relation to the Roman instrument. The kithara/cithara is closer to a harp than a guitar.
The next generation of the lute was a vihuela de mano, roughly translated to hand violin. The instrument gained more strings and courses. The instrument had tuning heads added and bass strings moved to the outside of the string group over the course of the Middle Ages.
Guitars retain the tuning head of the vihuela de mano but dropped back to just six strings. The strings in modern guitars tend to be metal or nylon instead of thread. Guitars have a large resonance chamber.
Modern guitars have long necks, a flat soundboard, a flat back, curved sides and a soundboard. Modern guitars may be acoustical or electric. The modern guitar is credited to Antonio Torres, a Spanish instrument maker, in around 1850. He invented the top bracing pattern used in both electric and acoustic guitars today except for those with X-braces. Electric guitars appeared in the 1930s. The Electro String Company released its first guitars in 1931. Electric guitars grew in popularity with rock and roll in the 1950s, becoming mainstream along with pop music.
Acoustic guitars are usually played via finger picking, while electric guitars are picked with guitar picks, though this may simply be a piece of plastic. Electric guitars have solid bodies to reduce feedback, while acoustic guitars are hollow.

Search the Web for More information on Guitar Musical Instrument at LookSeek.com Search