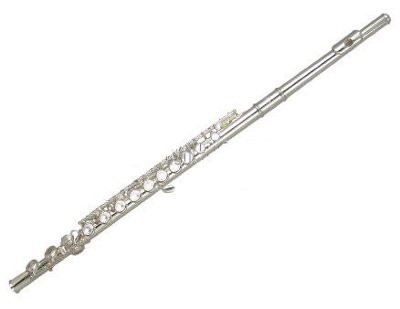 History and Facts about "Flute Musical Instrument". The oldest flutes go back to prehistoric times, carved from the bones of birds. Forty thousand year old flutes have been found in Germany, and these instruments were probably not unique. The flute, unlike many modern woodwind instruments, doesn’t require a reed. Simply cut holes at the right intervals in a long straight pipe and you have a flute.
The word flute goes back to at least the 1300s. The word appeared in Chaucer, the author of the Canterbury Tales. A flute player may be called a flutist or flautist.
Flutes have the distinction of being worldwide, used by Peruvian musicians today, Chinese musicians in the 12th century and cavemen who played the earliest flutes carved out of a bear’s femur. The primary difference between regional designs and ancient ones and the standard flute today is the standardized musical scale, affecting the placement of the holes. We know that the Sumarians of ancient Babylon had a scale for flutes, in stone tablets dated to 2000 BC.
Flutes use the same method of generating music. Opening and closing holes with the fingers alters the pitch of the instrument. Altering the air pressure as the flutist blows alters its volume and can alter its pitch. The resulting music can be made louder by using a larger resonator (a larger air cavity within the flute), a larger air stream, or simply increasing air flow through the flute. Flute players must carefully control the air’s velocity and angle or the flute won’t resonant.
The police whistle is classified as a type of flute, based on its design. The pan flute is a type of flute made by connecting a series of flutes with varying lengths. For pan flutes, the player blows into each flute to create a specific note instead of altering the air flow on a single flute via fingering of air holes. Western flutes may be side blown flutes or end blown flutes. Side blown flutes are standard for Western orchestras. End blown flutes are more primitive, represented by those excavated from Stone Age Europe and historical Anasazi flutes. Flutes can have one end open or both ends open.

Search the Web for More information on Flute Musical Instrument at LookSeek.com Search