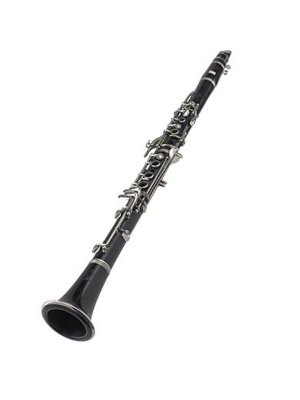 History and Facts about "Clarinet Musical Instrument". The clarinet is related to flutes, but flutes are an ancient instrument going back millennia. The modern clarinet evolved from the chalumeau in the early 1700s, when it is thought that Johann Denner added a register key to a chalumeau, in place of a register key. The word clarinet goes back to 1733. Alternate spellings for the instrument existed through the early 20th century. It was also called a clarinetto or little trumpet.
The clarinet didn’t do well in the low range. Later versions added more keys and better key placement. Their tone mellowed.
Clarinets became so engrained in orchestras in the mid-1700s that Mozart wrote pieces specifically for the clarinet. He considered it very close in range to the human voice.
Around 1812, Iwan Muller added pads to the clarinet so they wouldn’t leak air. He used pads with leather that were air tight. Modern instruments use synthetic materials or cork wood. The number of finger holes dropped to seven from the prior eight. However, the number of keys increased to thirteen. Eliminating the air leakage increased the number of keys, since air leakage made it difficult to maintain and control closer notes.
In 1839, Hyacinthe Klose altered the arrangement of finger holes and keys for simpler playing. He called his system the Boehm system, though it is different from the Boehm system introduced for flutes at the time. The Boehm system for clarinets became standard except in Germany, where a version of the Mueller clarinet and a system for playing it still dominates. A few players of Dixie use the Albert system, which arose in the 1800s but wasn’t widely practiced.
The C clarinet, a higher pitched clarinet, disappeared in the 1800s. The main clarinet design had gained enough notes and control to successfully play the higher notes, making the C clarinet obsolete. The A and B clarinets, named for the ranges they play, remain in use. The A clarinet dominated orchestras in the 1900s, but the B clarinet started to dominate musical lessons and thus the next generation of players.

Search the Web for More information on Clarinet Musical Instrument at LookSeek.com Search