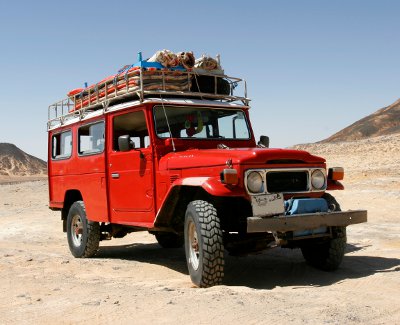 The Land Rover was part of the 1955 First Overland Expedition that ran from London to Singapore, essentially a journey across the longest distance at the same latitude possible on the planet. It is a race across Europe and Asia, from the Atlantic to the Pacific. Six undergraduate students took the journey simply to be the first to do this. The 1955 First Overland Expedition by Adrian Cowell, Tim Slessor, Antony Barrington Brown, Henry Nott, Pat Murphy and Nigel Newbery.

Henry Nott was the secretary of the University Motor Club. Antony Barrington Brown was a cameraman. Nigel Newbery was a mechanic.
The journey was funded in part by sponsorships. Land Rover supported the expedition some said was impossible for the publicity it would generate for the company.

That expedition cemented Land Rover’s capability in the public’s mind.

The Rover Company was absorbed into the British Leyland Motor Corporation or BL in 1967. Rover was spun out by British Leyland in 1984. In 2006, Ford Motor Company bought the rights to the Rover line from BMW in 2000.
Ford Motor Company purchased Jaguar Cars in 1989. Ford then bought Land Rover from BMW in the year 2000. Land Rover and Jaguar were joined into a single company in 2002.
Land Rover is held by a parent company, Jaguar Land Rover. Jaguar Land Rover was bought by Tata Motors in 2008. This deal included both the Land Rover four wheel drive vehicles and Jaguar Cars, as well as the dormant Daimler brand. The entire deal cost £1.7 billion.

Land Rover vehicles are manufactured in Halewood and Solihull in the UK. Research and development take place in Gaydon Centre in Gaydon, Warwickshire, England. It sits by an Aston Martin facility that was once part of a Royal Air Force base. Jaguar Land Rover also runs a research and development center in Whitley, Coventry, England. The Whitley site is also the headquarters for Jaguar Cars. The Whitley site was once an airfield, turned into an aircraft company after World War One before being turned into a civilian design facility after World War Two.

Land Rover is working on a research and development center at the University of Warwick, Coventry. Chinese car manufacturer Chery has invested around three billion U.S. dollars in a venture to build Land Rovers and engines and work on R&D.

In 2012-2013, Jaguar Land Rover sold 316,043 Land Rovers and 58,593 Jaguars. By the end of 2013, Jaguar Land Rover sold a record 425,006 vehicles. Land Rover and Jaguar sales were driven by growing demand in Asia and slow growth in Europe and North America. While Land Rovers were 80% of their sales, the Jaguar brand saw 20% to 40% growth in sales world wide.
All Facts are based on our research, always check lookseek facts in case of any errors. Lookseek is not responsible for any mistakes in this article.

Search the Web for More information on Land Rover Automobile at LookSeek.com Search