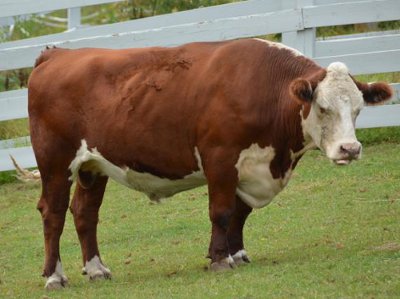 Facts about Hereford Cows, the Hereford cows are a breed of cattle that are believed to have originated from Herefordshire in England. The Hereford Cow are kept preferable for meat production, though a few people may opt to keep them just for fun. Herefords were among the first English breeds to be recognized as true breed. Scientific name for cow (Bos primingenious) "Fear of cattle is Bovinophobia."

The modern Hereford Cow breed is colored dark red or red-yellow, usually with white face, dewlap, crest, and underline. There are some breeds with white flanks and white marks below the knees including the hocks. Most of them have short yet thick horns that curve down at the side of its head, though there is a polled Hereford Cow strain which is found in UK and North America. The Hereford Cow have got adequately long legs, quite large in size, and smooth.

Hereford cows are generally associated with their foraging ability, vigor and their longevity. Most females will live and calve even beyond the age of 15 years. Bulls have capability of fetching good amount at stud until age 12 and more, though most breeders will opt to keep the elderly cow until they die naturally.

The Hereford Cow breed is very popular as it stands out and has adapted to the harshest climates across the globe. The Hereford Cow can survive very well in the arctic snow of Finland; the Hereford Cow can also endure the extreme heat of Northern Transvaal, and also thrive through the tough climate of northern Uruguay.

Hereford cows are very docile; this makes them a very easy breed to handle than other breeds.

Hereford cows are prone to eye cancer particularly in countries that experience continued bright sun-light and the breeds that have low level of red pigmentation on the eye.

Vaginal prolapsed is a hereditary problem in Hereford cattle, though it can also be influenced by nutritional deficiency. Another issue is the exposed skin on its udder due to light pigmentation is quite vulnerable to sun burn.

Just like every other living animal, Hereford cows need plenty of clean and fresh water on a daily basis. Consumption generally varies based on the climatic conditions; you will expect the Hereford Cow breed reared in hot summer conditions to consume large quantities. Care should be taken as dehydration is fatal.

Always supplement with salt and minerals. The Hereford Cow mainly rely on pasture or hay to cater for their dietary needs. You can also add grains to their feed which are very high in energy and fat, but should be given in minimal quantities.

Like most cattle, Hereford cows are easy to handle. You can brush your cattle regularly; run your hands on their body through their legs to make them get accustomed to being handled. This helps with future handling of the animal.
Hereford cows are generally good for meat production. They are easy to rare especially if you have a large field of pasture and fall ill less often.

Search the Web for More information on Hereford Cow at LookSeek.com Search