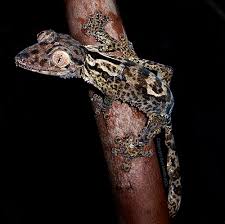 Another kind of the same species has charcoal-colored patches patterned with light grey enabling it to mimic the appearance of lichen, and its relatively short and flat tail resembles dead leaf.

The Henkel’s leaf-tailed geckos spend most of their time in the vegetation just a little bit off the ground. This nocturnal creature feeds on insects. Its daylight hours are spent resting while its head is facing downwards on trunk of trees.

Henkel's leaf-tailed gecko lays clutches of two spherical eggs that are carefully placed either under dead leaves, or beneath a plank of wood. The eggs stay incubated for 90 days, and hatch to reveal juveniles that are 60 mm long.

Not only is the Henkel's leaf-tailed gecko a master of disguise, but also has several tricks that help it get away from predators. Sometimes it causes confusion by choosing to shed its tail; it can also frighten its enemy by widely opening its mouth to expose the bright red cavity. Such like defensive tricks are usually accompanied by loud distress sounds.

The Henkel’s leaf-tailed geckos are endemic to Madagascar. They occur in the far north and northwest of the island. At low altitudes they prefer to inhabit the dense primary rainforest, though the Henkel's leaf-tailed gecko can also occur in secondary forest.

Like many other gecko species of Madagascar, the Henkel’s leaf-tailed gecko is majorly threatened by the continuous distraction of the forest. There is no single place that this specie is abundant even though it is able to tolerate some level of degradation of its natural habitat. Henkel’s leaf-tailed gecko rarity makes it quite vulnerable to its second biggest threat; collection, it is popular amongst the reptile hobbyists. Illegal collection where they are harvested from their habitat for exporting poses a bigger challenge.

The collection of the leaf-tailed gecko should be controlled and restricted by the Malagasy law. Though there are quite several laws that try to protect the geckos but all in vain, this issue needs to be addressed in order to prevent the extinction of this rare reptiles.

Search the Web for More information on Henkel-s Leaf-Tailed Gecko at LookSeek.com Search