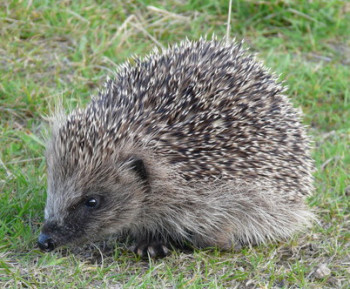 Facts about Hedgehogs, "Scientific name for Hedgehog is Erinaceinae". The term Hedgehog refers to any animal with spines or quills. There are several species of Hedgehogs.

All in a Name

The term Hedgehog derives from the fact that the animals like to hang around hedge-rows and has a nose shaped like a hog. Hedgehogs can even emit grunts like those of a pig. The Hedgehog have even been called hedge-pigs. Those hunting around the Hedge were not eating the plants but the insects that fed on the garden plants.
A group of Hedgehogs can be called a prickle or an array.

The Hedgehog are best known for their protective layer of quills. The Hedgehog’s quills are very similar in structure to those of the porcupine, but they are not related. The spines are not bones but tough, hollow hairs. The Hedgehog do not shoot the hairs, and they do not contain poison.
Depending on the species, Hedgehogs are five to twelve inches in length .

Hedgehogs are nocturnal, primarily insectivores but sometimes eat plants. For example, Hedgehogs will eat mushrooms, grass roots, berries, insects, worms, tails, frogs, and toads smaller than them, Their love of bird eggs has made them a danger to shore nesting birds in New Zealand and on the Scottish Islands.
Most will sleep the day in dug-out dens or hollows in rocks and trees. All species of Hedgehogs can hibernate, but whether they do or not depends on the temperatures and availability of food. If it is cold and hard to find food, Hedgehogs will hibernate. Some species living in the desert will hibernate through the dry season, this is called astivation.
The Hedgehog can grunt, squeal, and snuffle, the types of sounds they can make depends on the species.
Hedgehogs rely on their sense of smell and hearing to find prey, more than their vision. When they encounter a new scent, Hedgehogs may take the time to spread it all over their bodies.
The Hedgehog shed their spines over time like people lose their hair and grow new ones. This process is called quilling.
Hedgehogs will curl up in a ball as a last resort to protect themselves from predators like foxes, ferrets, mongooses, owls, cats, and dogs. Their preferred behavior is to run away or even charge the predator with the quills outward.
Hedgehogs are solitary except for when mating or raising the young. The gestation period for hedgehogs ranges from one to two months, depending on the species. The young are born with the quills beneath the skin that come out after they are cleaned. A smaller Hedgehog have larger litters and shorter life spans, two to four years in the wild and up to eight in captivity. Larger species live four to eight years in the wild and up to a decade and a half in captivity. The young only stay with the mother for four to seven weeks. The mothers have to protect the young from being eaten by male Hedgehogs.

There are Hedgehogs native to Europe, Asia, and Africa. Hedgehogs have been introduced to New Zealand. There are extinct species of Hedgehogs that lived in the Americas.

The Hedgehog are now sometimes kept as pets. The most common ones kept as pets are related to the North African Hedgehog. However, it is illegal to keep one as a pet in England. Domestic Hedgehogs are similar in intelligence to hamsters, but unlike the rodents, they will not seek out human attention or affection.

Search the Web for More information on Hedgehog at LookSeek.com Search