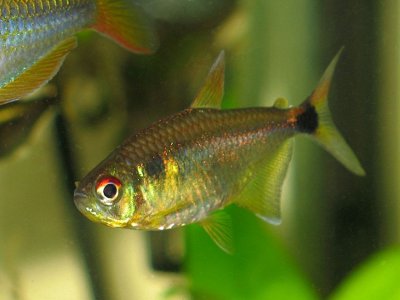 Head and tail light tetra, also known as Hemigrammus ocellifer falsus (or Tetragonopterus ocellifer or Holopristis ocellifer or Hemibrycon ocellifer or Beacon tetra) is a type of fish under the class of Characidae (Chiracins). It is commonly found in slow moving rivers and streams, floodplain lakes, tributaries and coastal regions. The fish is fairly widespread in nature and its populations known to exist only in specific parts of the world such as in Guyana, Peru, French, Suriname, Brazil and Guiana. Its main origin, however, is South America.

However, due to its popularity, Head and tail light tetra is has become an economically bred fish species. You’re likely to see it being sold around the world in huge numbers. This is also contributed by the fact that it is one of the easiest fish species to breed. In fact, they are adaptable and always thrive in majority of the aquariums, but on condition that they are kept in groups and provided the aquarium have dark substrate and/or some hiding areas within the water vegetation.

The fish is generally a peaceful type. However, just like it is the case with the other tetras, head and tail light tetra may nip at fins of long finned and slow moving fish such as the Siamese Fighters. During breeding, the fish scatters its eggs to make them easier to spawn on. it does best in soft acid water, but a water of pH 6-8 still offers it a suitable medium. Unlike the females, the male head and tail light tetra tend to be smaller and more slender.

Generally, this fish is a very good type for the beginners and even advanced hobbyists alike. And, as also common with other tetras, the head and tail light tetra exposes its best when placed in a heavily planted tank. In fact, the more the number of plants available, the higher the chances of the babies surviving.


Search the Web for More information on Head and Tail Light Tetra at LookSeek.com Search