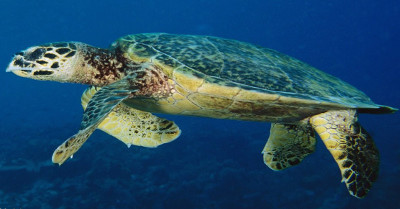 The Hawksbill sea turtle gets its name due to its hooked beak. The Hawksbill is a relatively small sea turtle. It is the only sea turtle and in fact one of the very few vertebrates, that feeds almost exclusively on sponges. Due to the fact that Hawksbill favor the clear and relatively shallow waters alone the coast of Florida, the Bahamas and Gulf of Mexico, they are considered the most tropical of the sea turtles.
The Hawksbill sea turtle shell known as “tortoise shell”, is a considered a coveted luxury item. Tortoise shell is used to produce accessories such as eyeglass frames, combs, jewelry and souvenirs. This practice is now illegal.
The Hawksbill turtle carapace length in adults reaches 30 to 36 inches.
The adults weight range from 89 to 133 pounds.
The Hawksbill feeds almost exclusively on sponges. They also eat jellyfish, sea stars, fish, urchins and crustaceans.
Listed as endangered since 1970, their population is increasing in Mexico, but sadly is declining worldwide.

Search the Web for More information on Hawksbill (Thermochemical imbricate) at LookSeek.com Search