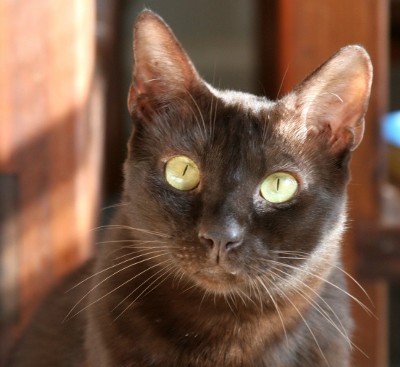 The Havana Brown Cat is a perfect domestic cat for older people who spend most of their time indoors. However, the Havana Brown Cats are not the cat you leave toddlers to play with. Older children, who can at least run away or dare to face the cat may be able to play with it. This is a very good cat breed for first timers due to its attentive behavior.

This is a man made hybrid breed of cat, a cross between brown cats and black domestic short-hairs. The Havana Brown Cat were known as Havana in Europe, but after they were imported to North America in mid-1950’s they became popular with the name Havana Brown Cat.

Because of their human friendly behavior, Havana Brown Cats doesn’t like to be alone for long periods. They keep themselves so indulged within people that it’s very easy for them to face side effects of solitary life.

Search the Web for More information on Havana Brown Cat at LookSeek.com Search