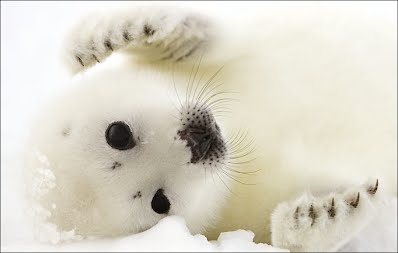 Facts about Harp Seals. Scientific name for Harp Seal is Pagophilus groenlandicus". The Harp Seal is an Arctic species, their habitat stretching from northeast Canada to Greenland to northern Europe. However, the Harp seal doesn’t live in the Arctic waters around the Pacific, in areas like Alaska or the Russian Pacific coast. Seals and sea lions and Walruses are semiaquatic mammals they are all in a group called pinnipeds, meaning "fin-footed".
The Harp Seal is also called the saddleback seal due to the dark saddle like markings on their gray or light yellow fur. The name means Greenland ice lover. The Harp Seal is sometimes called Phoca groenlandica.
The Harp seal’s range covers Greenland, the Arctic coast of Canada and northern Atlantic Ocean. Harp seals may migrate a thousand miles or more with the seasons.
Harp seals have jet black eyes that strongly contrast with the pups white fur. This is the species for which the pure white seal stuffed animals we see in the toy store.
The harp seal regularly dives to depths of three hundred feet but can dive as deep as a thousand feet (305 meters). They can remain underwater for up to fifteen minutes hunting fish and crustaceans like crabs. They can swim up to twenty miles per hour (32 km).
Harp seals live in large colonies on the ice when they give birth. Harp seal pups are snowy white. The pups are nursed until they reach eighty pounds (36 kg) at around twelve weeks old, at which point the mother stops nursing them. They then don’t eat until they can hunt for themselves six weeks later, around eight weeks of age. During this time, the Harp Seal’s fur darkens as a gray coat starts to grow. The mother herself didn’t eat while nursing the pup, losing up to seven pounds (32 kg) per day.
Once the Harp Seal start hunting, they resume growing until hitting four hundred pounds (182 kg) and six feet (1.82 meters) in length. Females are mature at five to six years of age.
The Harp Seal pups are prey to polar bears, wolves and other predators. They used to be heavily hunted for food and fur, but this has been greatly reduced except in Canada, Russia, Norway and Greenland. Harp seals are protected from hunting by the Marine Mammal Protection Act in the United States. They do sometimes drown in fishing nets.

Search the Web for More information on Harp Seal at LookSeek.com Search