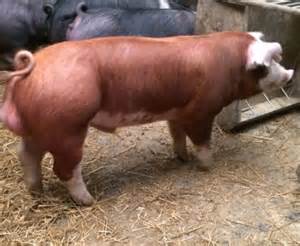 Hampshire breeds are the medium sized pigs with the black color body with a white belt or band that wraps the front legs and across their shoulders. The body is well built with long legs and noses, making the Hampshire Pig breed popular for the meat business. Other popular attributes of this breed comprise the power of endurance, energy, foraging and mothering capabilities, and being of high-quality breeding stock. The average weight of the Hampshire Pig male is 660 pounds (300 kg) and female is 550pounds (250 kg).

Hampshire Pig breeds are one among the easiest domestic pigs to groom. They only need a good cleaning with a gentle shampoo to eliminate dirt from the feet and the body. For show pigs, surplus hair is clipped from the ears and the tail. A hairbrush is used to neat up the Hampshire Pig hair and to eliminate any sawdust or dust particles that may be adhering to the coat of the pig.

Hampshire Pigs are raised for there meat such as ham, sausage, bacon and pork chops. Pigs can make great pets. A wild pig is called a (boar) that lives in the wild and can be hunted. Feral pigs (means wild) can be a very big danger where humans habitat. Hampshire Pigs can carry a variety of diseases and can pass them to humans. Pigs have small lungs compared to their body size.

Swine: is any variety of omnivorous, even-toed ungulates of the family Suidae, this includes hogs, boars and Hampshire Pigs having a short neck, thick skin a movable snout and a stout body. Hampshire Pigs unlike is said, happen to be very clean animals. Pigs make sure their bathroom area is far away from where they eat Lie down, rest even piglets (baby pigs) will find a place to go to the bathroom, far away from their nest.

The four feet of the Hampshire Pig are called "trotters" that humans eat as a delicacy called pigs feet or pigs knuckles. A Hampshire Pigs foot has four toes that are pointed downwards when the pig walks it walks on the tips of its toes, rather than its whole foot and only uses two of the toes and the outside toes for balance. The Hampshire Pig has tougher feet at the ends are hooves. The two toes in the middle of the foot are slightly webbed helps the pigs balance for walking.

Hampshire Pigs have 44 teeth when full grown, when they are baby pigs (piglets) the have 28 teeth which will fall at when they are 12 months old. Just like human teeth, the pig has an enamel coating that makes the pigs teeth stronger and helps it curb disease. Hampshire Pigs chew their food because pigs have a digestive system similar to a human digestive system and cannot digest food that is not chewed.

Search the Web for More information on Hampshire Pig at LookSeek.com Search