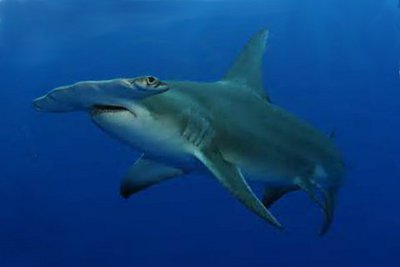 Facts about Hammerhead Shark, "Scientific name for Hammerhead Shark is Sphyrna". The Hammerhead Shark is a breed of shark that belongs to the Sphyrnidae family. This shark attains this name owing to the strange and distinctive structure of its flattened head and is laterally extensive into the shape of a hammer. The majority of Hammerhead Shark breeds are located in the genus Sphyrna. Many Hammerhead Sharks are found all over the world in warmer waters beside continental shelves and coastlines.

The eyes are positioned on the sides of the distinguishing hammer head of the shark that offer the breed a better 360-degree vision in the perpendicular plane. This means, the Hammerhead Shark can always, see below and above them. The Hammerhead Shark breed has strangely petite mouths and seems to carry out many bottom-hunting. They are as well known, to form schools during the daytime, occasionally in groups of more than 100. In the twilight, similar to other sharks, they turn out to be lone hunters.

The Hammerhead shark breeds feed on a huge variety of prey, including squid, fish, crustaceans, octopus and other sharks. Stingrays are their favorite food.

Reproduction in Hammerhead shark breeds takes place once in a year, and usually happens with the male shark violently biting the female shark, pending she concurs to mate with him. Usually, the female shark births litters 12 to 15 pups. These pups group together and swim on the way to warmer water, pending they are mature enough and huge enough to live on their own. The average lifespan of the Hammerhead shark breed ranges from 20 to 30 years.

Search the Web for More information on Hammerhead Shark at LookSeek.com Search