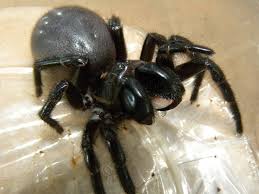 The Victorian Funnel Web Spider can not jump nor swim, but funny enough they can stay for long hours inside the pool and only supported by the air bubbles.

Though it is not an aggressive creature, however one might get bitten and they will get a headache and eventually get sick.

The Victorian Funnel Web Spiders are common in the Dandenong Ranges area. Both the male and the females of this species have the same habits and behavior to Melbournce Trap-door Spider. The female will mostly remain in or around the silk-lined burrow.

During the late summer and autumn, the Victorian Funnel Web Spider male will wander searching for a mating partner and may enter into the buildings.

The Victorian Funnel Web Spider will use traps to catch their prey. The trap is usually made up of strands of silk that radiates from the burrow entrance. During the night times the Victorian Funnel Web Spider will sit just at the entrance with its legs in contact with the silken strands. When it gets a feel of an insect tripping the set trap, it immediately pounces on it.

Victorian Funnel Web Spider will mostly feed on insects, but at times they will catch small lizards or frogs.

Search the Web for More information on Victorian Funnel-web Spider at LookSeek.com Search