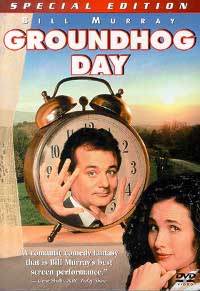 Hey Wood-chuck Chuckers, its Groundhog Day! (it is as I write this at least)

This morning in Punxsutawney, PA ole Phil the groundhog saw his shadow. Such a revelation was met with an anemic reaction since thus far the winter has been quite mild. So, why do we watch, why does this town put on this yearly pageant? Perhaps even more puzzling- why has a comedy centered around this holiday only grown in acclaim and even reverence since it premiered back in 1993? American literary theorist and legal scholar Stanley Fish named the film as one of the 10 best American films ever made. What about it led the United States National Film Registry to deem it "culturally, historically, or aesthetically significant&quote back in 2006 when it added the film to its ranks? Now I love Bill Murray and Harold Ramis but those guys don't seem the type to hobnob with (what I'm assuming) must be a slightly snobby crowd in their new registry abode. Roger Ebert is an avowed fan- ok, you get the picture.

The super short summary is this: Bill Murray plays Phil Connors, an obnoxious weatherman who is sent on his yearly assignment to cover the Groundhog Day festivities and ends up reliving that same day over and over and over again, until he has morphed into a new man with a new outlook on life.

We don't know for sure how many times Phil relives that day. Director Ramis guessed about 10 years, though later he said that was probably not enough time and proposed a span of 30 to 40 years. After researching the film the website WolfGnards.com put forth the number of eight years, eight months, and 16 days based on how long it might take for Phil to master the many skills he has by the film's end. Co-star Stephen Tobolowsky says that he was told by Ramis it took Phil 10,000 years to get it right.

The religious themes in this film run shallow and deep. It's not at all hard to see for instance that Phil needs to be redeemed and given his comeuppance. And somehow this small town turns into his own personal Purgatory- even death doesn't last. I read recently that the film is a fan of many Buddhists as Phil is seen experiencing a rebirth as he casts off his own selfishness to embrace caring for others. To look at it another way, Phil essentially reincarnates into himself and is only allowed to move on after experiencing a profound spiritual change (dare I use the word enlightenment?)

It makes perfect sense that it would take Phil a ridiculous amount of time to truly change. His initial reactions are very human and thus easily understood and even encouraged. One such reaction creates in him a potent God-complex and he seems to relish in his own brand of hedonism. He selfishly uses the absence of real consequences to indulge in all manner of sins, from robbing an armored car to seducing a naive woman using information he gleaned from her during a previous day. He indulges his body knowing he doesn't need to worry about after effects. He even wows a group of people by correctly answering every single Jeopardy question with subdued but still somehow potent panache.

Perhaps it is only after exhausting his options at being selfish does Phil start to get around to helping others. At the start he's probably only doing so out of boredom. But the blanket of positive energy is just as fleeting as the previous selfish overtones- he is subjected to repeated failures at saving an old homeless man and is downright angry at how a boy he saves from falling never says thank you. It's a wonder to me that were not shone what has to have been multiple relapses into his old ways that surely happened. His unsuccessful suicide attempts seem oddly justified and when doing good proves just as insignificant as being selfish it's almost weird that he doesn't again try to end his life. And yet, Phil finds a way to move on with a new attitude, perhaps even taking comfort in the fact that his future is oddly secure and he can bask in praise and pride for as long as the fates allow. The glow given by others is felt more deeply than the glow he had gotten so good at bestowing upon himself.

I could go on and on, (this is already twice as long as I assumed it would be) but that is not only because this movie is exceptionally well made and seems to only get better with age, but also because it stands as one of the most spiritual films I have ever seen. An expert on comparative religions could have a field day with it. A novice like me is almost incapable of separating and identifying all the themes. It's all here: elements of karma, fate, purgatory, Prometheus reborn, hedonism, fatalism, and existentialism are shone to degrees unimaginable.

It might just take 10,000 years to fully explain Groundhog Day

Search the Web for More information on Groundhog Day at LookSeek.com Search