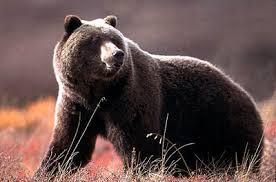 Facts about Grizzly Bear, "Scientific Name for Grizzly Bear is Ursus arctos horribilis". A Grizzly Bear is an Ursus type of bear that comes from the Ursidae family. The Grizzly Bear are native to North America, and they are occasionally called as brown bear. In some locations, the Grizzly Bear is usually called by its nickname, the Silvertip Bear because of the silvery, grizzled shine in its fur.
A Grizzly bear makes its home in many different habitats, from to sub-alpine meadows to dense forest, arctic tundra and open fields. In North America you will find, grizzly bear in Idaho, Montana, Wyoming, western Canada, Alaska, and you may find a few left in Washington. Historically, they could be found from California to Ohio and from Alaska to mexico. As the world was young there were around 50,000 grizzly bears in North America. Estimates today due to people populating areas and hunting there are an estimated 1,800 grizzly bears.

The Grizzly bear has a brown-colored body and it can differ from extremely light cream to black color. The bear has a concave face, a unique bump on its shoulders, and extended claws, with a length that ranges from 2 to 4 inches (5 to 10cm). Both the claws and the hump are traits connected with the outstanding digging skill of the Grizzly bear. The extended protective hairs on their shoulders and backs habitually boast white tips and offer the bear a grizzled look, and hence the bear attained the name, the Grizzly Bear.

The Grizzly bear is an omnivorous animal, and its diet can differ extensively. They usually feed on seeds, roots, berries, grasses, deer, elk, fish, insects and dead animals. In the early fall and late summer . During this period, they can achieve a weight increase of three pounds per day.

Usually, the Grizzly bear is a solitary animal, but it is not extremely territorial and it may be observed, feeding jointly where food is plentiful, such as at white bark pine locations and salmon streams. Female Grizzly bear will take care of their offspring for two to three years. When a female juvenile leaves her mother, they habitually set up their own home range fairly close to the home range of their mother. Male Grizzly bear will normally wonder further being more adventures as a male, but may also stay close by.

Grizzly bears are among the most sluggish reproducing land animals. Female bears do not normally reproduce unless they are about four years old. The mating season of the Grizzly bear takes place between May and July, but the body of the female will delay the implantation of their eggs in the uterus until October or November. The reason is female Grizzly bear needs to gained adequate fat over the summer to raise the cubs and also live, if this does not happen, the implantation may not take place. Gestation will be from 180-275 days, including delayed implantation. Usually, the litter size ranges from 1 to 4 cubs.

The average lifespan of the Grizzly bear ranges from 20 years to 25 years.

Search the Web for More information on Grizzly Bear at LookSeek.com Search