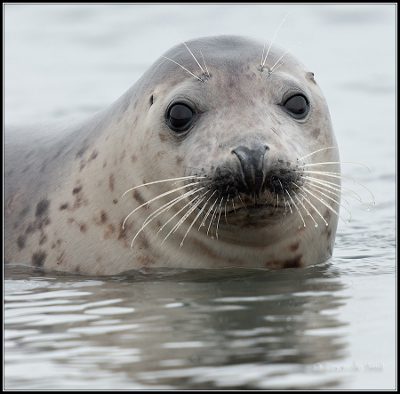 Facts about Grey Seals. "Scientific name for Grey Seal Halichoerus grypus". The grey seal is a breed of seal that belongs to the large seal Phocidae family. The Grey Seals are largely found on either shore of the North Atlantic Ocean. This breed is the only variety classified in the Halichoerus class. "Scientific name for seals is Pinnipedia". Seals and sea lions and Walruses are semiaquatic mammals they are all in a group called pinnipeds, meaning "fin-footed".

The grey seal breed feeds on an extensive variety of fish, generally demersal or benthic species and sand eels. Sometimes the Grey Seals consume whatever is accessible, including lobsters and octopus.

The grey seal breeds congregate in huge groups to mate, with male seals contending with each other to get the access to female seals. Land reproduction gray seals are habitually polygynous, which means that one male seal will potentially mate with a maximum of 10 female seals in the reproduction season. The pups of the grey seal breed are born between September and November with a thick, malleable silky white hair and they quickly fatten up on the fat-rich milk of their mother. Within a month of their birth, the Grey Seal pups start shedding their fur, and grow thick water-resistant mature fur, and depart for the ocean to learn to find food for them.

The average lifespan of the grey seal breed ranges from 25 years to 35 years.

Search the Web for More information on Grey Seal at LookSeek.com Search