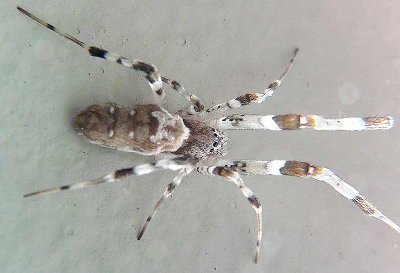 Facts about Grey Grey House Spiders, "Scientific name for Grey House Spider is Zosis geniculatus". Grey house spider is mostly seen in urban areas. They are also known by the name Window Spiders. As per zoological classification it belongs to the Family Desidae. Few other categories are found all across Australia.

The Grey House Spiders weave webs and mostly in a funnel like shape. This is the reason they are often mistaken for funnel-web spider, but both of them are not similar. The structure of the Grey House Spider web is designed to capture the prey while it tries to fly across the web and ends up in the narrow end. The narrow end usually has a thicker weaving density. Once trapped, the prey doesn’t get away.

Grey House Spiders have oversize brains.
In the Grey House Spider the oxygen is bound to "hemocyanin" a copper-based protein that turns their blood blue, a molecule that contains copper rather than iron. Iron-based hemoglobin in red blood cells turns the blood red

When the female Grey House Spider can be as big as 1/2 to 11/16 inches (14 to 18 mm) the male grows to only half of the size of the female, about 3/8 inches (9 mm). They are widely distributed in southern and eastern Australia. They are peridomestic also they pertain to live around human habitats.

The Grey House Spider reside mostly in rough barked trees. This portion of the tree also helps them as shelter and to hide among the cracks. Wood boring insects leave the trunks after boring a hole in them and the sap flowing from it attracts bees, flies and ants. These organisms become prey of the Grey House Spiders.

The Grey House Spider feed on arthropods and are carnivorous & insectivorous.

A Grey Grey House Spiders stomach can only take liquids, so a Grey House Spider needs to liquefy their food before they eat. They bite on their prey and empty its stomach liquids into the pray which turns it into a soup for them to drink.

Search the Web for More information on Grey House Spider at LookSeek.com Search