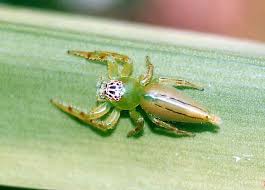 The Green Jumping Spider also has a potential of jumping to an approximate height of 8 inches (20 cm) from any flat surface because of its special muscles that connect joints of the legs. The spider uses the hind legs to jump, and the front legs in grabbing the prey.

The Green jumping spider also possesses claw tufts that protrude from the legs and enables it to climb vertical and smooth surfaces. The Green Jumping Spiders vision is also excellent since the eyes are arranged, in a way that the degree of vision is 360.

The Green jumping spider also has eight eyes in total. These eyes are set in rows two and two, and four. The front eyes of the Green Jumping Spider are very large. In fact, they are often long-sighted than other spiders.

The jumping spider lives in a nest instead of building a web. This nest is built between a bark or leaves. It is amazing that that they open their homes at both sides and uses them during the cold seasons and night.

During summer or spring, the female Green Jumping Spider lays and guards the eggs in her nest. The spider often leaves a safety line to enable it crawl back just in case it jumps and the jump fails.

Green Jumping Spiders have oversize brains.
In the Green Jumping Spider the oxygen is bound to "hemocyanin" a copper-based protein that turns their blood blue, a molecule that contains copper rather than iron. Iron-based hemoglobin in red blood cells turns the blood red

Green Jumping Spiders have two body parts, the front part of the body is called the Cephalothorax-(the thorax and fused head of spiders). Also on this part of the body is the spider’s gland that makes the poison and the stomach, fangs, mouth, legs, eyes and brain. Spiders also have these tiny little leg-type things called (pedipalps) that are next to the fangs. They are used to hold food while the spider bites it. The next part of the Green Jumping Spiders body is the abdomen and the abdomens back end is where there is the spinnerets and where the silk producing glands are located.

A Green Jumping Spider’s legs and body are covered with lots of hair and these hairs are water-repellent, which trap a thin layer of air around the body so the spiders body doesn't get wet. It allows them to float, this is how some spiders can survive under water for hours. A Green Jumping Spider feels its prey with chemo sensitive hairs on its legs and than feels if the prey is edible. The leg hair picks up smells and vibrations from the air.

A Green Jumping Spiders stomach can only take liquids, so a spider needs to liquefy their food before they eat. They bite on their prey and empty its stomach liquids into the pray which turns it into a soup for them to drink.

Spiders do not have a skeletons. They have a hard outer shell called an exoskeleton-(a rigid external covering for the body in some invertebrate animals). The exoskeleton is hard, so it can’t grow with the spider. The young Green Jumping Spiders need to shed their exoskeleton. The spider has to climb out of the old shell through the cephalothorax. Once out, they must spread themselves out before the new exoskeleton will harden. Now they have some room to grow. They stop growing once they fill this shell. Female Green Jumping Spiders are usually bigger than males.

Search the Web for More information on Green Jumping Spider at LookSeek.com Search