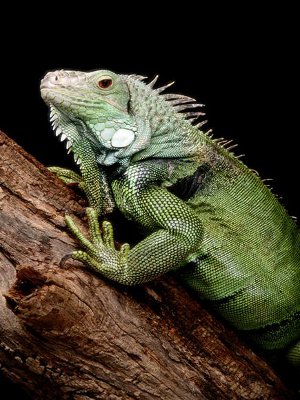 Green iguanas are among the largest lizards. A green iguana can weigh up to 18 pounds (8 kg) and can attain an average body length of 6 1/2 feet (2 meters).

Green iguanas are usually (but not always) green, with a touch of gray. Female and juvenile male Green Iguana tend to be a brighter shade of green compared to adult male iguanas. Green Iguana can change color slightly, but their expertise in this sector pales significantly when compared to chameleons.

A green iguana’s body is structured in such a way that it is long, with a long tail used as a weapon and for balance, and short legs to complete the look. The Green Iguana’s body is covered with soft leathery scales.

A green iguana spends a significant percentage of its life in the canopy. The only time an iguana will descend is when it needs to mate, lay eggs or change trees. With the average life span of a Green Iguana in the wild averaging at 20 years, you may guess how many of those years it spends atop a tree.

As a pet, the Green Iguana is wildly popular. In fact, iguanas are among the most popular reptile pets in the US. This is surprising because it is difficult to care for an iguana properly, with most captive iguanas dying within the first year. Many owners opt to turn the Green Iguanas loose or turn them to reptile rescue groups. For this reason, iguanas are sometimes referred to as 'disposable pets'.

Green iguanas have teeth so sharp that they can easily shred leaves and even human skin. These teeth are coupled with some really strong jaws.

Iguanas are active during the day (also diurnal) and prefer to feed on leaves, flowers and fruit. The diurnal are often found near water and are excellent swimmers. When swimming, the iguana will let its four legs hang limply by its side while it propels itself using powerful tail strokes. An iguana can remain comfortably submerged in water for thirty minutes.

Because of their stout build, Green iguanas seem clumsy while in fact they are fast and agile on land. They are also agile climbers.

Female iguanas lay clutches of 20 to 71 eggs once per year. This happens during a synchronized nesting period. After laying the eggs, the female Green iguana offers no parental protection to its young. It however defends the nesting burrow during excavation. The little iguanas are hatched after 10 to 15 weeks of incubation.

When cornered by a predator, an Green iguana will attempt to fight or flee depending on the circumstances. If there’s a body of water nearby, it will swim away. A wounded Green iguana is more likely to fight compared to an uninjured iguana. If a predator gets a hold of the iguana’s tail, the iguana detaches its tail and flees. The tail grows back after a while, with no permanent damage.

Search the Web for More information on Green Iguana at LookSeek.com Search