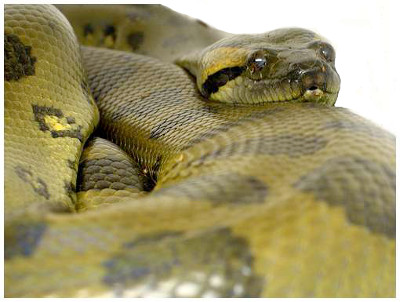 Green Anaconda Snakes are one of the most beautiful snakes in the world. The Amazon jungles of South America and flooded Pantanal region (Western Brazil but extending into Bolivia) also countries east of the Andes, including places like Ecuador, Peru, Venezuela, Colombia and the island of Trinidad and as far south as northern Paraguay of Venezuela, is well known Anaconda habitat, its where the Anacondas call home. They are part of the Boa Constrictor family. Green Anacondas, also known as water boas. Anaconda is derived from "Eunectes", which in Greek means (good swimmer) and the Latin word "murinus", (of mice) Presumed preying on mice. Green Anacondas are loaners and like to live near lakes, rivers and swamps. When they are threaten they like to hide in the water, that's why you will find them primarily close to a water source.
Amphibious animals are the main food for Green Anacondas, like toads, frogs, fish, small crocodilians, as well as birds, ducks, caiman and turtles also out of water pigs, rats, mice, etc. Even has been know to eat big animals it usually sticks with this diet for food. Green Anacondas like to float on the surface of the water with their snout barely poking out. They do not want their pray to see them. When the pray comes near to drink at the banks of some water by the streams or Lakes, the hungry Green Anaconda will grab the pray with its jaws. When coiling around an animal and squeezing the pray to kill it, as soon as the heart stops the snake releases. The Green Anaconda has very sharp fangs, Anacondas have a very large number of sharp rear teeth, they will not use the fangs to inject venom, the Anaconda will use them to grab hold of their prey. Green Anacondas do not bite their pray and kill with poison using their front fangs like a lot of other snakes. After the prey is dead, they will swallowed their pray whole, without chewing, at their leisure. Green Anacondas have very efficient, but it's also a slow digestive systems. They usually takes many days to digest a small pray, and weeks maybe months for a huge meal. The Green Anacondas digestive system produces a very strong digestive enzymes, which can digest everything except fur, beaks, and claws. But unbelievably, these enzymes are not able to digest plant matter, so it will pass through their system intact
Green Anacondas live a very long life around 35-50 years. The average size of one of these giant Anaconda snakes, the Females are bigger than males 12-20 feet or (3.5 to 6 meters) and Males 8-12 (2.5 to 3.5) and Growing in some cases up to 550 pounds (or around 228 kilograms)
Green Anacondas give birth to live young, around 20-32 at a time. Anacondas mate in a very unusual style of behavior. The ovulating female attracts Several males resulting in a (mating ball) that can often hide the female from view. The mating always takes place in water. After a gestation of six months the females give birth to live babies in April to July, the wet season normally coincides with their birth, in the snakes native range.
If Green Anaconda were to come across a person in the Jungle it would most likely slithering away, because they don't have much reason to attack a human, they will usually only attack if they feel threatened.

Search the Web for More information on Green Anaconda Snake at LookSeek.com Search