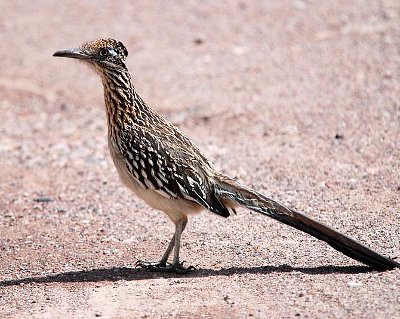 In terms of length, the Greater roadrunner bird measures about 52 cm (20 inches) to 62 cm (24.5 inches) and the weight of its wingspan is between (221 and 538 grams). It is among the largest North American birds of the cuckoo family. In terms of height, it measures around 25 to 30 cm (10 to 12 inches). The adult Greater roadrunner bird has a thick and dark bill with a bushy crest. Its tail is also dark and long. The front part of the neck especially on the belly area has a blue coloration. This coupled with the dark head and back makes it look artistic. On each of their zygodactyl foot, the Greater roadrunner birds have two forward facing toes and other two that are facing backwards.

The Greater roadrunner bird is brown in color and endowed with pale gold spots. On the chest and upper parts they have extensive blackish streaking. The crown is black in color while the wings have dark colorations with white highlights.

This species of birds just like many in its family dwell in shrubby and desert areas of the southwestern part of United States and the northern region of Mexico. Keen observers have seen the Greater roadrunner bird in some states in the US such as Arizona, California, Colorado, Texas, Nevada and a few others. In Mexico, this bird species is common in states such as Baja California Sur, Jalisco, Sinaloa, Zacatecas and Guanajuato.

Just like seabirds, the Greater roadrunner birds have the capacity of secreting a highly concentrated salt solution.

The Geococcyx californianus is a great nest maker and does so in cactus or bushy areas. It makes a platform of sticks on the place where it lays its eggs. It produces about 3 to 6 eggs which take up to 20 days to hatch. The chicks need another 18 days to fledge. The Greater roadrunner bird are aggressive especially around their young ones and can be seen when protecting their nests. The Greater roadrunner bird do not mingle so much with other birds and they join with their female counterparts during breeding.

Although greater roadrunners have the capability of a weak flight, they spend most of their time on the ground. In terms of speed, they have an average speed of 32 km/h (20 mph) but there have been cases where these birds run up to 42 km/h (26 mph). This makes them one of the fastest bird.

The Greater roadrunner birds mainly feed on seeds, fruits and insects. In some instances, this bird can hunt down small rodents, reptiles, scorpions, spiders, millipedes and centipedes to supplement its diet. It kills its prey in a very interesting manner. When the prey is large, it hits it with its beak and smashes it against rocky surfaces. At times, they join forces especially when the prey is huge to be killed by one.

According to the records available, the oldest Greater roadrunner bird was 7 years old.

Search the Web for More information on Greater Roadrunner Bird at LookSeek.com Search