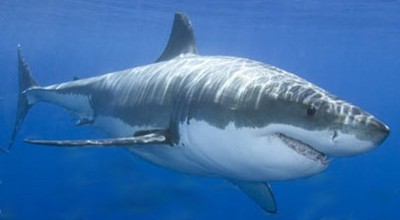 The Great White Sharks mouth contains up to 3000 individual sharp serrated teeth separated in rows, and when one breaks off another takes its place. The teeth can measure more than 2 1/2 inches (5.7 centimeters) long.

This species of lamniform shark can be found in any warm coastal and offshore waters, including the United States, the Mediterranean, Japan, Chile, and South Africa, where population seem to be the densest.

An adult Great White Sharks can swim up to a speed of 43 miles (69 kilometers) per hour. And is known to leap out of the water from below to catch their prey.

The Great White Shark exploded into popular culture and world-wide fear, with the release of Peter Benchley’s best–seller “Jaws” , and the 1975 release of the Steven Spielberg Blockbuster movie of the same name. This is what gave the status of being man-eaters, which is actually far from the truth.

Great White Shark do not attack humans on purpose, sometime they mistake a human for a fresh meal and take a bite until they recognize its not their normal diet. But this has still not stopped the Great White Shark from putting fear in hearts of many people.

Great White Sharks have two small openings above and behind the eyes. Their ears are small, but they are very powerful. Inside their ears, there are cells that can sense in the surrounding water even the tiniest vibration.
Great white sharks have an elaborate sense of touch, what’s called the lateral line – a visible line along the side of a Great white shark’s body and all other fish, from its to its head to its tail, consisting of a series of sense organs that detect vibration and pressure, its made of cells that can recognize vibrations in the water. Great white sharks can detect both the amount of movement and the direction made by its prey, even from as far as 800 feet (244 meters) away.

Search the Web for More information on Great White Shark at LookSeek.com Search