Back To Category Wren
Title : 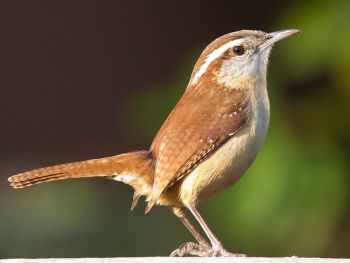 The Great Carolina Wren birds’ cries sound like a chirr-up. It is repeated at intervals. Their standard territorial song is a “come to me” or “tea-kettle” sound repeated several times in quick succession.

The Great Carolina Wren bird tends to stay close to the ground. They rarely go to the top of trees to issue songs, preferring the lower levels of trees, bushes and near the ground to find food. They eat insects, spiders and other small prey. They will eat flying insects and aquatic ones.
They are common in the American southeast, from Louisiana to the Carolinas. The Great Carolina Wren bird can be found as far north as the Missouri River and as far south as northern Mexico; a small population is found in Yucatan, Mexico but may be a separate species or distinct subspecies, the white-browed wren. They live in fields, swamps and woodlands.

Great Carolina Wren birds mate for life. They are unusual for wrens in that the male sings to attract the mate, but the female does not.
Carolina wrens build nests in holes in trees, the eaves of buildings and even in fence posts. They have been found nesting in other enclosed spaces like boxes and flower pots.
Males and female Great Carolina Wren bird participate in nest-building. The Great Carolina Wren bird raises two broods, sometimes three in one season. Each clutch of eggs has three to four eggs in it, and they hatch fourteen to sixteen days later. Hatchlings remain in the nest for another two weeks. The fledglings will return to their parents for another two weeks for feeding before being considered independent by the parents. By that time, the parents will have another clutch of eggs if not more hatchlings to feed.

The young fledgling birds resemble the older ones except for having lighter coloring.
Their primary predators are cats, weasels, minxes and others.

Search the Web for More information on Great Carolina Wren at LookSeek.com Search