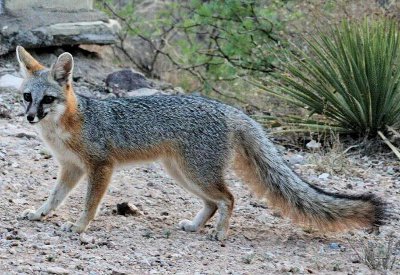 Facts about Gray Fox, "Scientific name for Gray Fox is Urocyon cinereoargenteus". Gray Fox is an Urocyon type of animal that belongs to the Canidae family. The Gray Fox are nocturnal animals, and they are also called Tree Foxes. The Gray Foxs range all through most parts of the southern parts of North America, ranging from the southern parts of Canada to the northern parts of South America. The unique feature of the Gray Fox is that it is the only member of the Canidae family, which is capable of climbing the trees, and hence, it attains its name as Tree Fox. This Gray Fox and the closely associated Channel Island Fox are the only existing members of the Urocyon type, which is measured to be amongst the most prehistoric of the existing Canids.

The Grey Fox resembles a small dog, with its elongated snout and sharp ears, but it boasts a much bushier tail that is generally pointed straight out. The Gray Fox fur is mostly grey in color with a few reddish brown regions, some white-colored areas, and a black-colored tip on the tail. The legs of the Gray Fox are relatively stout and short.

The Gray Fox is mainly differentiated from nearly all other Canids through its strong neck, grizzled upper parts and black-tipped tail, whereas the head can be easily differentiated from all other Canids of North America by its extensively separated sequential ridges that form a shape of the alphabet “U”. There is modest sexual dimorphism, save for the female Gray Foxes being somewhat smaller than the male ones.

The Gray Fox has a line of black-colored hair that runs along the middle parts, and they have oval-shaped pupils. Gray Fox can climb vertical trunks that are without branches to a height of 18 meters (60 feet) and can leap between branches. The Gray Fox have extremely sturdy, non-retractable claws that are fastened to help them grab onto trees. The Gray Fox descends chiefly by jumping between branches, or by descending gradually backwards like a domestic cat. The Gray Fox is crepuscular or nocturnal and dens in empty trees, stumps or fitted burrows during the daytime. These types of tree dens may be situated 30 feet (9.14 meters) above the ground.

The Gray Fox breed is an omnivorous animal and it is a solitary hunter. Mostly, they feed on shrews, voles and birds. The Gray Fox also feed on rodents, lagomorphs, such as brush rabbit, jackrabbit, etc. In the zoos they are fed with all kinds of fruits and vegetable matter.

The Gray Fox breeds are monogamous, and their breeding season differs geographically. In Michigan, the Gray Foxs mate during early March, whereas in Alabama, they breed during February. Usually, the gestation period will last for 53 days and the litter size varies from 1 to 7 pups. The juveniles Gray Fox start to hunt when they attain the age of 3 years, with their parents. By the fall, these pups embark on their own in training to breed and raise their individual litters by the subsequent breeding season.

The average lifespan of the Grey Fox ranges from 6 years to 10 years in the wild.

Search the Web for More information on Gray Fox at LookSeek.com Search