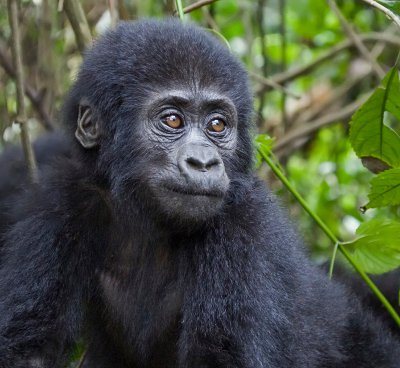 The gorilla is the largest member of the primate family. The gorilla species is part of the gorilla genus, making its formal species name or scientific name gorilla gorilla. In French, the Facts about Gorillas. "Scientific name for Gorilla is Gorilla gorilla". Gorilla species is called gorille. In Spanish, it is called gorilla. The gorilla is part of the hominidae family and Hominoidea superfamily. Gorillas have large bodies, black hair, dark eyes, human-like hands and small eyes. Gorillas live thirty to forty years in the wild, up to fifty years in captivity.

There are four subspecies of gorillas: Mountain gorilla, Cross River gorilla, Western lowland gorilla and the Eastern lowland gorilla. The eastern gorillas and western gorillas are more distantly related to each other than chimpanzees and bonobos. However, except for differences in their teeth and genetics, there is little to physically distinguish the different subspecies of gorillas from each other. In contrast, bonobos’ distinct matrilineal society and “free love” sexuality is a stark contrast to the male dominated chimpanzee groups where every female must mate with every male when she goes into heat. Gorillas have a marked difference in size between males and females; males are up to twice the weight of females, and about 21/32 inches (0.2 meters) taller.

Gorillas are herbivores, eating only plants. Gorillas only live in the rainforests, avoiding the grasslands humans eventually came to dominate.
Gorillas are polygamous. A single senior male, a silverback, has a harem of females. He dominates the group and mates with the females, in some cases even with his own daughters. Gorillas live in groups of five to ten but sometimes larger groups exist. Females can stay with the mother’s group or join another harem. They become sexually mature at seven to eight years old but rarely breed until ten years old. Males once they become mature are driven out of the group.
Gorillas have a low birth rate, producing only one baby every four to six years. They have perhaps three or four offspring in a lifetime. The female is pregnant for approximately 256 days or 8 1/2 months. Their babies are more alert at birth than human infants at that stage.
The gorilla is in danger of extinction in the Congo Basin. They are rarely pursued by predators in the wild. They were previously hunted as exotic game, their hands sometimes made into artifacts. The babies were sometimes taken for exhibition in circuses or zoos, while the entire adult population of the group died trying to protect the baby. The animal trade has mostly stopped in that regard, but gorillas are still hunted for bush meat, essentially killed for food by locals.

Gorillas are susceptible to many diseases that can be spread by humans. It is though that hemorrhagic fevers like ebola and Marburg have been spread through the bushmeat trade. Gorillas can pick up respiratory infections. Their greater threat, though, is habitat loss and deforestation throughout their range.

There are an estimated 130,000 gorillas in the wild. Several thousand more live in captivity around the world, most of whom are western lowland gorillas.

Search the Web for More information on Gorilla at LookSeek.com Search