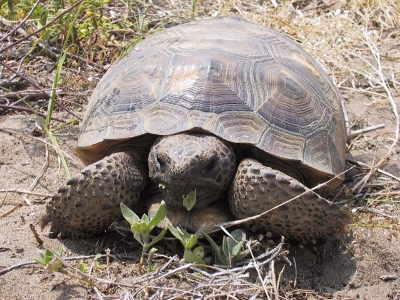 Gopher tortoises dig burrows which shelters more than 350 animals. Therefore, they are considered to be keystone species in their community. The Gopher Tortoise are state reptiles of Georgia and Florida.

The Gopher tortoise are considered to be big terrestrial turtles with forefeet that are well adapted for burrowing and big, strong hind feet. This is why they dig so many burrows. The forefeet have scales that protect the Gopher tortoises while they are burrowing.

Generally gopher tortoises are dark brown to gray black in color and they have a yellow bottom shell. The female Gopher Tortoise are larger than the males but male’s undersides shells are concave just like all other turtles. Males have longer tails too than females and their shells extend under their chins. This is what they use for ramming. The hatch-lings scute is bright yellow with brown edges.

The Gopher tortoises have very interesting facts. They are considered to dig burrows up to ten feet deep and forty feet long. These burrows are very helpful to the species that get shelter from them. These species are known as commensals and they include; reptiles, birds and insects. Sometimes there are fires that break in the forests and these mammals get refuge in the gopher’s burrows.

Apart from that the burrows offers shelter, protection from predators, protection from strong sun that is normally experienced in deserts and give the Gopher Tortoises a site for laying eggs.

Gopher tortoises feeding habit is another thing to admire. They prune the plants they eat and leave health plants to grow. The seeds too are fertilized and distributed in their home range and this is beneficial to the community. The Gopher Tortoise mostly feed on plants, broad leaved grass, regular grass and legumes. Mushrooms and fruits like pawpaws, blackberries and apples are also among their delicacies.

Mating season begins from April to June. The male Gopher tortoise start the courtship by visiting the female’s burrows. The Gopher tortoise communicate through head bobbing, shell nipping and rubbing pheromones from scent glands on their legs.

The female Gopher Tortoise dig their nest at the mouth of the burrow or alternatively on a sunny site where they lay their eggs. After the Gopher Tortoise bury their eggs which take around three months to hatch. Mostly the eggs and hatch-lings are eaten by raccoon's, dogs and other predators that are present in those burrows.

For the ones that survive, the Gopher tortoise spend the winter season in their mothers burrow and later get out forming their own. They become productive when they are between 10 to 25 years old but this entirely depends on the latitude they live in.

The lifespan of the gopher tortoises is believed to be around 60 years though there are states that have reported gophers that have lived up to 78 years. The Gopher tortoise live in dry and sandy uplands. They are considered to be an endangered species because they are being eliminated by human activities as well as animals. In fact most people love eating their meat.

Search the Web for More information on Gopher Tortoise at LookSeek.com Search