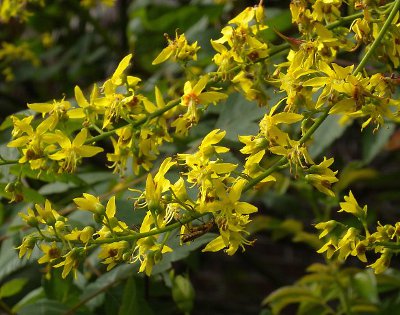 Facts about Golden Rain Tree, "Scientific name for Golden Rain Tree is Koelrecuteria paniculata". The Golden rain tree is native to eastern Asia around Korea and China. It is considered to be a small, irregularly-shaped, open-branching deciduous tree. The Golden Rain Tree is a fast growing tree which can grow up to a height of about thirty to forty feet (9.14 to 12.19 meters) with a spread of the same or greater. Upon maturity, it produces a round-shaped crown.

The Golden Rain Tree has feathery, compound leaves which can either be bipinnate or pinnate giving it an overall lacy appearance. The Golden Rain Tree leaves can grow up to eighteen inches (45.7 cm) long. Individual leaves have approximately seven to seventeen lobed-shaped leaflets. In spring, its leaves appears purplish to pinkish bronze in color while during summer they mature to bright green. Upon fall, these leaves usually turn yellow in color. The Golden Rain Tree is considered to be the most appealing in the fall due to its huge clusters of spectacular yellow blossoms. Its blossoms appear in early summer with bright yellow flowers of long panicle of about twelve to fifteen inches (30.4 to 38 cm). Golden Rain Trees falling flowers usually form a pleasant golden carpet under the tree plant.
A Full grown Golden Rain Tree can absorb as much as 48 pounds (21.77 kg) of carbon dioxide a year. The same Golden Rain Tree could also produce enough oxygen in a day for two people. In a single day, a large Tree can drink up to 100 gallons (378.5 liter) of water from the ground and discharge it into the air.
You can tell a Golden Rain Trees age by the number of growth rings inside. Growth rings size shows what kind of conditions accrued that year, the temperature and if it was a dry or wet year.
Bark of the Golden Rain Tree protects it from the elements and is made up of dead cells.

The flowers of the Golden rain tree, upon falling, gives rise to seed pods which are two inches (5 cm) long and reddish purple in color. Inside the pods, are brown papery seed like capsules resemble the Chinese lanterns. Its bark is light brown in color and becomes furrowed as the Golden Rain Tree ages.

Golden Rain Tree roots usually grow two to three times the width of the tree branches. The ideal time to fertilize your Tree is in late fall or early spring. If you want to transplant a tree do it in fall, this is ideal for most trees.
Golden Rain Tree leaves are made up of many colored pigments, green chlorophyll hides the colors during the growing season of spring and summer. As days get shorter and cooler temperatures come in the fall, it cause the chlorophyll to break down and than the other color pigments can be seen.

The Golden rain tree can well establish in USDA zones of five to nine and in full sun. It is tolerant to both cold and dry conditions, alkaline soils and air pollution. It can do well in a variety of loose, dry, and average to well-drained soils.

The Golden Rain Tree requires to be pruned during winter spells when it is dormant. A well pruned Golden rain tree can be used as a park or a street tree due to its eye catchy appearance and shade.
Golden Rain Tree growth is referred to as Meristem (The undifferentiated embryonic plant tissue from which new cells are created, as that at the tip of a root or stem). This tissue can be found at the tips of shoots and leaves. Inside the stem growth in thickness occurs at the vascular cambium.
Golden Rain Trees make their own food from sunlight, carbon dioxide, water, and nutrients from the soil.

Search the Web for More information on Golden Rain Tree at LookSeek.com Search