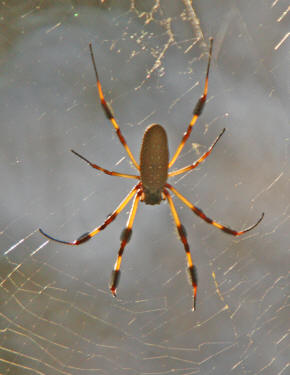 The venom the Golden Orb Weaver Spider is indeed potent, but nonetheless, not-lethal to humans. Its venom share similar neurotoxic traits of that of a Black Widow, just without the potency. Webs-The Genus Nephilia gets its nickname, the Golden Orb Weaver Spider not because of its physical appearance, instead because of the color of the spiders silk. The yellow threads built in their web reflect like gold off the sunlight. They weave elaborate complex webs to aid them in their protection and also in hunting for food. Evidence suggest that the web serves a dual purpose: 1.the sunlight helps trap bees that are attracted to the bright yellow threads;2. in shady spots, the yellow can blend into the background and help camouflage the spider and aid in protection.

A Golden Orb Weaver Spiders stomach can only take liquids, so a spider needs to liquefy their food before they eat. They bite on their prey and empty its stomach liquids into the pray which turns it into a soup for them to drink.