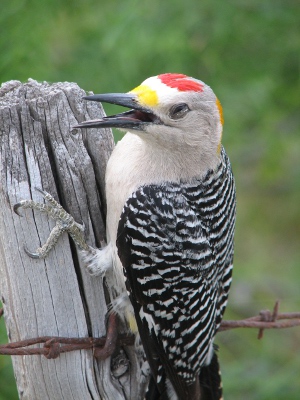 Golden-Fronted Woodpeckers are omnivores; meaning - an animal that eats food of both animal and plant and origin.

Both dead and live trees are exploited for nesting, including utility poles, fence posts and artificial nest boxes. Usually, the Golden-Fronted Woodpeckers prefer old growth mesquite, but nests have been seen in such different varieties, as live oak, pecan, Anaqua, Hackberry and willow. Placement of the aperture of the nest hole ranges from near land level to as much as 35 feet (10.66 meters) with heights, ranging from 8 feet to 20 feet (2.43 to 3.04 meters) being common. Both male and female woodpeckers used to spend 6 days to 10 days in constructing their nest cavity. A cavity from an earlier year may also be employed by them. The deepness of the cavity ranges from 6 inches to 18 inches (45.7), and these woodpeckers are shy while around their nests.

years. There are more than 190 species of woodpeckers worldwide, but none of them are found in polar regions, Madagascar, New Zealand or Australia.

Most woodpeckers have zygodactyl feet, having 4 fingers, which means they have two toes facing the front and two toes facing the back, that helps them to have a strong grip on trees vertically. They use these 8 fingers with their stiff central portion tail feathers to brace on trees as they climb.

Male and female Woodpeckers are able to drum hollow trees logs execrate. This pecking activity also plays an important role in communicating with each other. Golden-Fronted Woodpeckers drumming is also to attract a mate, mark out territory, both sexes are known to drum.

When feeding, drumming and building a nest cavity, a Golden-Fronted Woodpecker can peck up to 20 times per second, wow that's fast! or a total between 9,000 and 12,000 pecks in a day.

The average life span of a woodpecker in the wild is 4 to 7 years, depending on the species and environment

Search the Web for More information on Golden-Fronted Woodpecker at LookSeek.com Search