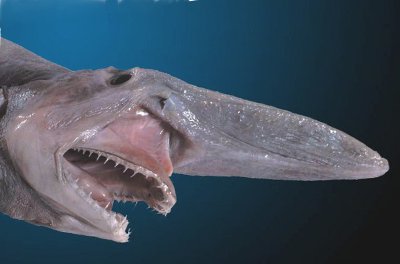 Facts about Goblin Shark, "Scientific name for Goblin Shark is Mitsukurina owstoni". The Goblin shark is at times referred to as a living fossil because of the depths that it lives in. This has also made it one of the least understood species of sharks. Goblin Shark is a member of the family Mitsukurinidae. It is pink skinned and has a flattened but elongated snout. Goblin Sharks also has protruding jaws which have nail-like teeth. At maturity, the Goblin shark measures about 9 feet 8 inches to 13 feet 1 inches (3 to 4 meters) in length although some variations have been recorded in length.

The Goblin shark has a flat snout which is long and resembles the blade of a sword. With age, the proportional length of the snout decreases. This is because the rest of the body grows faster compared to the snout. Goblin Shark has smaller eyes and a mouth that is parabolic in shape. It has 31 to 62 lower teeth and 35 to 53 upper teeth. The rear teeth located at the corners of the jaw are flattened in shape and structured for crushing. Goblin Shark also has 5 pairs of short gill slits with the fifth pair located above the origin of the pectoral fins.

The Goblin shark feeds mainly on deep living teleosts and rattails. Also, cephalopods such as squids and octopuses, crustaceans form a major portion of the diet. According to research evidence, the Goblin Shark seems to forage for food at the sea floor and in areas above it.

The Goblin Shark is ovoviviparous. This means that the embryos hatch in the uterus and the mother Goblin Sharks give birth to live pups which are fully developed.

There are over 400 types of sharks, Sharks have the most powerful jaws on on earth. Goblin Sharks jaws, both the upper and lower jaws move. Goblin Sharks skin is made of denticles instead of scales like other fish. The denticles are constructed like hard, sharp teeth (tooth-like projection) and this helps to protect the Goblin Shark from being injury. The Goblin Shark is carnivores meaning: an animal that feeds on flesh (Meat). "Scientific name for Shark Selachimorpha"
"Fear of Sharks Selachophobia"

Search the Web for More information on Goblin Shark at LookSeek.com Search