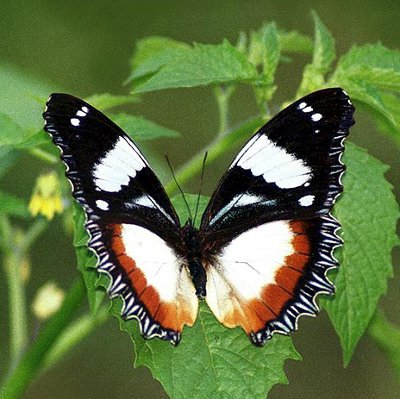 The Gladiator Butterfly is native to Madagascar. Its range is so small that there are no subspecies.

While the Gladiator Butterfly lacks the larger range of many species, it is not on the IUCN red list of threatened species or prohibited list for the Convention on International Trade in Endangered Species of Wild Fauna and Flora. The Gladiator Butterfly lives in the Afrotropic ecozone but is only found in Madagascar or on display as part of a collection. Due to the Gladiator Butterfly bright colors and vivid contrasts, this species was targeted by collectors soon after its discovery. They are still collected today, and paying for them depending on quality. There is a Lepidoptera Breeders Association in England that breeds the Gladiator Butterfly species and others to help avoid extinction.

The Gladiator Butterfly species was first described by Hewitson in 1863. The Gladiator Butterfly is a brush footed butterfly, also called a four footed butterfly. This term originates from the shorter pair of front legs that make it look like it has only four legs instead of six. The Hypolimnas genus, also called the diadems or egg-fly genus, is known for mimicking the Danainae or poisonous milkweed species. Hence the Hypolimnas species will usually mimic the Danainae species in the area that is poisonous, if one exists. However, the Hypolimnas species is not itself poisonous; the mimicry simply dissuades predators. This is called Batesian mimicry.

When caterpillars become fully grown they will attach to an appropriate leaf or small branch, than they will shed the outside layer of their skin and a hard skin underneath known as a "chrysalis" will be their new look
An adult Gladiator Butterfly will come out from the "chrysalis" than it waits a few hours for its wings to dry and fill with blood, before it takes its first flight.

Search the Web for More information on Gladiator Butterfly at LookSeek.com Search