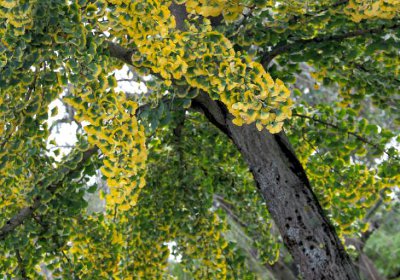 Facts about Ginkgo tree, "Scientific name for Ginkgo tree is Maidenhair". The Ginkgo is a dioecious gymnosperm tree having its male and female on separate trees. It is considered to originate from a genus of highly unusual non-flowering plants. This genus was first recognized in Permian about two hundred and fifty years ago. The Ginkgo tree is derived from 'seed ferns' of the peltaspermales order. A mature Ginkgo tree can grow to a height of approximately 60 to 75 feet (18.28 to 22.86 meters) with a spread of 30 feet (9 meters). The Ginkgo tree can grow in a straight columnar shape with sparse branches. Its fully grown trunk can reach a maximum spread of about 13 feet (4 meters). However, some of its varieties can have a narrow spreading depending on the geographical location.

The Ginkgo tree, in its early stages of development, can have central trunk which is pyramidal in shape with an ascending, lateral, regular and asymmetrical branching. As the Ginkgo tree matures, its trunk becomes tremendously sized. Moreover, it assumes an oval to upright spreading and sometimes irregular branching. The male tree is slightly longer and is characterized by slim column while the female Ginkgo tree is more spread and has a wider crown.

Ginkgo Tree leaves are made up of many colored pigments, green chlorophyll hides the colors during the growing season of spring and summer. As days get shorter and cooler temperatures come in the fall, it cause the chlorophyll to break down and than the other color pigments can be seen.
Ginkgo Tree growth is referred to as Meristem (The undifferentiated embryonic plant tissue from which new cells are created, as that at the tip of a root or stem). This tissue can be found at the tips of shoots and leaves. Inside the stem growth in thickness occurs at the vascular cambium.
Ginkgo Trees make their own food from sunlight, carbon dioxide, water, and nutrients from the soil.

The Ginkgo tree has both short and long branches which grow at nearly right angles. The tip of a long branch of the Ginkgo tree can change to a shorter branch, while a shorter one can change to a long branch giving the mature tree a more irregular form. The Ginkgo tree has buds which are mounded with specific leaf scars. Its bilobed shaped leaves grow on the long branches alternately during spring. However, this leaves grow very slowly in clusters on the tips of its short lateral branches. Its shoots are responsible for the production of seeds and pollen.
A Full grown Ginkgo Tree can absorb as much as 48 pounds (21.77 kg) of carbon dioxide a year. The same tree could also produce enough oxygen in a day for two people.
You can tell a Ginkgo Trees age by the number of growth rings inside. Growth rings size shows what kind of conditions accrued that year, the temperature and if it was a dry or wet year.
Bark of the Ginkgo Tree protects it from the elements and is made up of dead cells.
Ginkgo Tree roots usually grow two to three times the width of the tree branches. The ideal time to fertilize your Ginkgo Tree is in late fall or early spring. If you want to transplant a Ginkgo Tree do it in fall, this is ideal for most trees.

Search the Web for More information on Ginkgo Tree at LookSeek.com Search