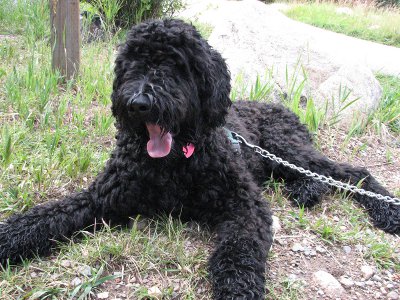 The Giant Schnauzer dog has an insatiable hunger for exercise and should be considered as a pet only if you can manage its exercise needs. The Giant Schnauzer Dog will need exercise twice a day or they can get very difficult to deal with. Take them for long walks or jogs. A big back yard for playing is recommended or a lot of acres in the country.

Giant Schnauzer Dogs pant to keep cool with 10 to 35 breaths per minute with an average of 24 breaths per minute. A large dog breed resting heart beats between 60 to 100 times per minute, and a small dog breed’s heart beats on average between 100 to 140 pant a lot.
A Giant Schnauzer Dog’s mouth can apply approximately 150 to 200 pounds of pressure per square inch and an American Pit Bull Terrier, German Shepherd Dog and a rottweiler can have 320 LBS of pressure on avg.

Search the Web for More information on Giant Schnauzer Dog at LookSeek.com Search