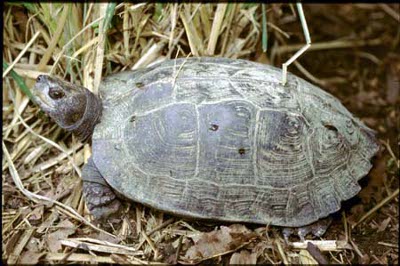 The giant Asian pond turtle species is a semi aquatic turtle. They are one of the largest hard-shelled semi-aquatic species. The upper shell, also known as the carapace, has a black or brown to grayish-brown coloration with a well-marked ridge which runs along the center and is highlighted with a pale streak. Adults measure up to 19 inches (48 cm).

The lower shell of the Giant Asian pond turtle is yellow in color. However, the juveniles often possess a pattern of black colored lines which branches out from the black blotches on each of the scutes. The Giant Asian pond turtles head is broad and has a brown to grayish-green color with mottled several orange, pink, yellow or green spots that fates as the turtle matures. It has a slightly protruding snout with a v-shaped, shallow indentation on the upper jaw.

The horn colored to cream jaws are flanked with a pair of projections that are tooth like. Some of the features of the Giant Asian pond turtle which makes it the best species for the semi aquatic conditions are its large limbs with web shaped toes. In general, the male giant Asian pond turtle has a thicker tail and a slight inwards curve of the plastron than the female species.


Giant Asian Pond Turtles are classified as vulnerable and are on the IUCN red List. They are protected by Vietnamese Law. Even thought they have a protected status they are still illegally hunted and traded.

The major threat that the giant Asian pond turtle species faces is the increasing, uncontrolled freshwater turtle’s trade in Southeast Asia. Some of the species varieties have been traded, pushing them towards extinction. In other regions like Malaysia, the turtle species makes about fourteen percent of the filed exports of freshwater turtles. The turtle is exploited for subsistence food and medicine. They are also threatened by pollution and drainage of there habitat.

Most researchers work has observed the Giant Asian pond turtle species often feeds on primarily aquatic plants in the wild habitats. However, the turtle varieties which are kept in captivity usually has an omnivorous type of diet.