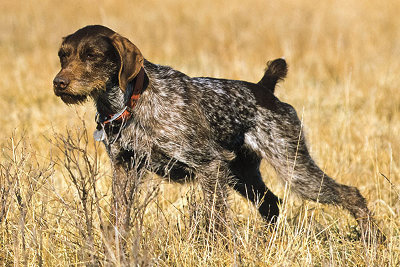 The color of the coat varies from white to liver either with roan, ticking, or spotted and sometimes it can just be solid silver.

A German Wirehaired Pointer Dog’s mouth can apply approximately 150 to 200 pounds of pressure per square inch and an American Pit Bull Terrier, German Shepherd Dog and a rottweiler can have 320 LBS of pressure on avg.
When purchasing a German Wirehaired Pointer Dog from a breeder, make sure to find a good breeder with references, check at least two to three of the puppies that were purchased from this breeder.